A trophy is an item available in Plants vs. Zombies that is received when the player completes a special level for the first time, which includes mini-games, puzzles in Puzzle Mode, and levels in Survival Mode. They are picked up just as one would pick up a seed packet at the end of most regular levels by tapping or clicking on them. In Plants vs. Zombies, if there are more levels to be unlocked in the category where the player collected a trophy, a new level is unlocked in that category after obtaining a trophy. When the player unlocks all the levels in the respective mode, a message simply says "Keep on collecting those trophies!", meaning to collect all trophies for that mode. If all ten trophies are collected in the Survival Mode, this will unlock Survival: Endless.

A trophy is usually accompanied by the acquisition of a diamond upon the first completion, with gold coins in a money bag containing 250 coins for subsequent successful attempts. However, in Vasebreaker mode, five gold coins, worth 250 coins, are found in the trophy instead of a diamond. In addition to that, replaying Vasebreaker levels gives two gold coins, worth 100 coins. Gold coins are also obtained from the remaining Lawn Mowers, Pool Cleaners, and Roof Cleaners.

The Silver and Gold Sunflower Trophies count as trophies also; although they give the player three and five diamonds, respectively, instead of one. 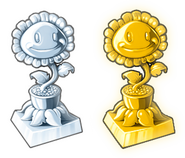