Attacks here and next door.
Plant Evolution: This gets +2

.
"Labor to keep alive in your breast that little spark of celestial fire called conscience." -Gourd Squashington
Tricorn is a colossal rare plant card in Plants vs. Zombies Heroes and a member of the

It does not have traits, and its ability allows it to attack on the lane it is on and the lanes adjacent to it per attack similar to the Splash Damage trait, while its Plant Evolution ability gives it +2

However, unlike Splash Damage, Tricorn's adjacent shots do damage to the zombie hero.

It is based on an acorn, the nut of the oaks and their close relatives, and a tricorn, a type of hat where three sides of the brim were turned up (cocked) and either pinned, laced or buttoned in place to form a triangle around the crown, as seen by its cap.

Its name is a portmanteau of "tricorn," referring to the shape of its cupule, and "acorn," the real-life plant it is based on. It also incorporates "tri-," referring to its ability to attack on three lanes at once.

Its description and appearance are based on George Washington, the 1st president of the United States of America.

Tricorn, by itself, functions as a more powerful Threepeater, boasting +1

compared to it. It can be used as an amazing finisher in budget

Freeze or tempo decks, easily replacing Gatling Pea (for Green Shadow) and Winter Melon if you do not have them yet.

Green Shadow and Nightcap are the most adept users of Tricorn since they possess strength-boosting cards. While Green Shadow can boost Tricorn's health too, Nightcap is slightly better in terms of Evolution due to him having access to Puff-Shroom, a 0-cost plant that allows its Evolution ability to activate immediately on turn 6.

However, Green Shadow can use bonus attack cards such as Plant Food to further augment Tricorn's ability to take out multiple zombies, if possible. Citron and Beta-Carrotina can use Pecanolith to make Tricorn do 6 damage on three lanes, with the bonus of not requiring Evolution, although note that Pecanolith decks will inevitably lose power over time if plants take damage anyway.

However, unlike Threepeater, Tricorn does not benefit from pea synergy, such as from Torchwood or The Podfather. Its nut tribe does not particularly benefit its offensive property other than being Conjurable by Cosmic Nut.

To make up for its lack of offensive tribe synergy, Tricorn can Evolve on any plant to get +2

and raise its base strength to 4, allowing it to do 12 damage overall in one attack. This alone makes Tricorn a worthy fighter for any

If you do plan to Evolve it, however, make sure to pack plants that are cheap or have Fusion abilities (with the exception of Lily Pad) to use with Tricorn. Good candidates are Pea Patch and Pumpkin Shell, who give an additional stat boost to beef Tricorn up even further, and Puff-Shroom and Lil' Buddy, who are free.

But Evolving Tricorn puts him at risk of being targeted and destroyed (or Bounced, at the very least). Tricorn is vulnerable to Rolling Stone if unevolved, and Rocket Science if it has Evolved. Other removal cards like Locust Swarm, Squirrel Herder, and

To circumvent this, have multiple threats on the field to increase the likelihood of Tricorn surviving. Or, if you are playing as Green Shadow, Umbrella Leaf can protect Tricorn from a big proportion of said cards as most of them are tricks.

Tricorn should not be taken lightly due to its high health and potentially devastating abilities, and everything should be done to dispose of it as soon as possible. When you are facing this plant when it is not Evolved, you can take advantage of its low strength and immediately destroy it using Rolling Stone, Weed Spray, or Celestial Custodian.

If it Evolves or gets out of hand from stat-boosting abilities, a Bouncing card can be played to reset Tricorn's stats, as well as its Evolution ability. 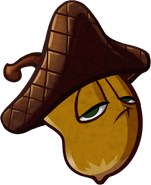 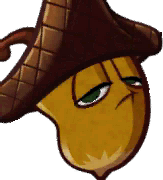 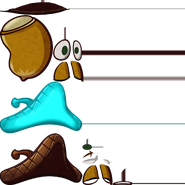 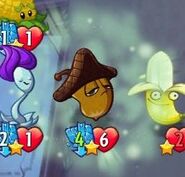 Evolved Tricorn with the 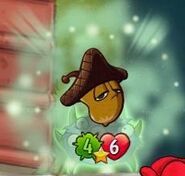 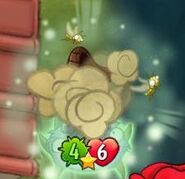 Nibble being played on unevolved Tricorn

Double Strike on a lane

due to Onion Rings' ability