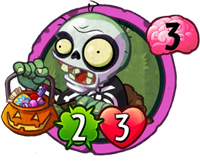 When you play your first Trick each turn, Conjure a Treat.
Trick or Treat? He is haunted by that question - and by an answer that continues to elude him.
Trick-or-Treater is an event zombie card in Plants vs. Zombies Heroes and a member of the

. He has the Gravestone trait, and his ability Conjures either a Sugary Treat or a Healthy Treat when the first zombie trick is played every turn, starting from the turn he is played.

Trick-or-Treater was introduced in the 2016 Halloween event alongside Jack O' Lantern. As of Feastivus 2016 (update 1.10.14), both of them were also made craftable. He was available through tickets again from October 17th to October 24th.

He is based on the Basic Zombie's Lawn of Doom costume from Plants vs. Zombies 2. However, in this game, he holds a bucket of candy.

His name and ability are based on a trick-or-treater, a person who goes trick-or-treating from house to house on Halloween and asking for treats with the phrase "Trick or Treat?"

His ability is a nod to his name, because the player needs to play a trick to conjure a treat.

Trick or Treat? He is haunted by that question - and by an answer that continues to elude him.

Trick-or-Treater can easily give you treats to boost other zombies' stats. It may be a good idea to play some of those treats on Trick-or-Treater himself so that he can survive longer. Or, you can save them for later use when a zombie is about to be destroyed or needs more strength. The treats can also be used as a cheaper, watered-down alternative to Vitamin Z. Some good zombies to pair up with this zombie are Paparazzi Zombie, who gets boosted immensely, and Trickster, who lowers his cost because the treats are tricks.

Speaking of the treats, Super Brainz, Huge-Gigantacus and Rustbolt can easily play them at a lower cost from either Dr. Spacetime (since Trick-or-Treater Conjures a treat into your hand) or Zombology Teacher, since the treats are tricks, meaning both can reduce their cost, allowing you to use up fewer brains to spam them.

He can be a nuisance later in the game if not defeated quick enough. To deal with this zombie, do the same as you would with Mad Chemist. Since he has the Gravestone trait, Grave Buster and Blockbuster can take him out before he can activate his ability. Bouncing this is a viable option too, though it is better to destroy him with tricks such as Berry Blast. If he or any zombie gains too much strength from the treats, Shamrocket or Doom-Shroom can easily take them out, although the latter can destroy your plants too. It is also best to get rid of any Dr. Spacetimes or Zombology Teachers on the field; otherwise, you would have to deal with your opponent easily spamming treats on their zombies.