View source
watch 02:56
Raise a Floppa - The Loop
Do you like this video?
Play Sound
File:Tricarrotops.H

.
Beta-Carrotina tracked Huge-Gigantacus all the way down the Meteor-Z-carved tunnel to Hollow Earth. Carrots there had evolved in a very different direction.
Tricarrotops is a colossal legendary plant card in Plants vs. Zombies Heroes and a member of the

Bullseye trait, and its Dino-Roar ability gives it +1

It is based on the carrot (Daucus carota subsp. sativus), a root vegetable that is usually orange in color, though purple, red, white, and yellow varieties exist; and the Triceratops, a genus of herbivorous ceratopsid dinosaur that lived in North America during the late Cretaceous period.

Beta-Carrotina tracked Huge-Gigantacus all the way down the Meteor-Z-carved tunnel to Hollow Earth. Carrots there had evolved in a very different direction.

Bullseye trait instead of the

Double Strike trait. While Bananasaurus Rex excels in sheer power, Tricarrotops is cheaper, which means it can set itself up more safely, as there are less threats playable in the earlier rounds. Its

Bullseye trait shouldn't be underestimated either due to it constantly getting boosted thanks to its ability.

Also, unlike Banansaurus Rex's, Tricarrotops' class (Guardian) doesn't have many card draw options, so it could be difficult to boost this plant. But if you manage to do so, you may end up having a very powerful fighter on the field. To achieve this, play cards such as Gardening Gloves or Photosynthesizer which can either draw or Conjure cards to activate its Dino-Roar ability. A great card to use with Tricarrotops is Starch-Lord, which, if it survives, Conjures a root card at the start of the turn, further strengthening Tricarrotops. Due to its root tribe, Tricarrotops can also be boosted by Starch-Lord.

Grass Knuckles is the best choice to use Tricarrotops with, due to the

Mega-Grow class' abundant card draw possibilities, such as Flourish, Bamboozle, and Holo-Flora, one of Grass Knuckles' superpowers. Grass Knuckles can also use bonus attacks and Coffee Grounds to allow Tricarrotops to do more damage, in addition to Mega-Grow's characteristic buffs. And finally, he has access to Umbrella Leaf, which can protect Tricarrotops from instant-kill or damaging tricks.

Citron and Beta-Carrotina are also good choices, due their access to card draw as well. Notable mentions include Magic Beanstalks which can be shuffled in by Lima-Pleurodon or Sow Magic Beans, Mayflower which Conjures cards, and Planet of the Grapes, which has the potential to allow Tricarrotops itself to draw cards. They also have cards to Bounce zombies, allowing Tricarrotops to land its attacks on the zombie hero. Grave Mistake also has potential, as it will draw a card when played, and also can remove a gravestone fronting Tricarrotops.

Tricarrotops is a card that should not be left alone for a long time. A high-health

Bullseye card that boosts itself each turn (with more potential stat boosts during the turn) is difficult to deal with in most cases. However, it is not without its counters.

Hearty heroes can use Rolling Stone or Weed Spray on it before it gets too strong,

Brainy heroes can use Rocket Science once it passes the 4

Deadly zombies, which can also help them get rid of Tricarrotops.

You can also Bounce it to reset its stats, but keep in mind it can be played again. Also, the option of playing tricks will be completely shut down once Tricarrotops is given the

Untrickable trait by Umbrella Leaf, but that only kills tricks and not abilities like Smelly Zombie, Primordial Cheese Shover, or Zombot 1000. 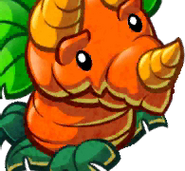 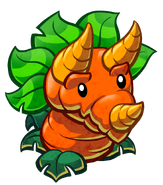 Tricarrotops on the Colossal Pack, along with Mondo Bronto

Tricarrotops tinted gray due to a glitch