Deals damage to all enemies and lowers their speed

The Tree line (树系; pinyin: shù xì) was a Class A

Brave plant line in Plants vs. Zombies: All Stars which was introduced in the 1.0.51 update, alongside Viking World.

All members of the Tree line were based on, as the name entails, various types of trees.

Small Bush, as its name implies, was based on a bush, otherwise known as a "shrub", a small perennial woody plant that distinguishes themselves from trees by their multiple stems and short height.

Cypress was based on a cypress, a conifer tree or shrub in the family Cupressaceae. 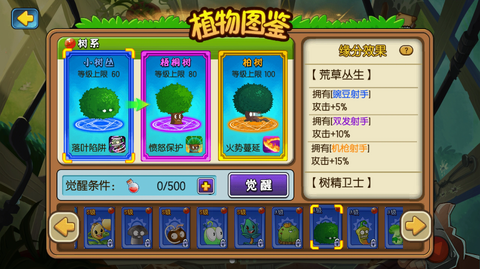 After unlocking the Tree line, additional puzzle pieces could be used to upgrade it, which increases its stats and ability LVs.

Tree line's stats would be increased if these specific plants were unlocked.