Treasure Yeti is a bonus boss zombie in Plants vs. Zombies: Garden Warfare, Plants vs. Zombies: Garden Warfare 2, and Plants vs. Zombies: Battle for Neighborville. Its appearance is similar to the Yeti Zombie. However, it wears a black eye-mask, a crown, large necklaces with a star and the word "BLING" on it, and carries a bag with coins and diamonds behind it. It does not try to attack the player; instead it flees when the player approaches. Treasure Yetis drop coins when attacked, and will provide a large number of coins when vanquished. It will burrow away if it stays alive for a certain amount of time.

Treasure Yeti was introduced in the Suburbination DLC, and appears in Garden Ops in the special objective "Vanquish the Treasure Yeti." If it appears, it will be the only zombie in the wave, however, as it runs, it can summon Yeti Imps, which can cause trouble. Though it doesn't attack directly, it can freeze the player with an ice blast if the player gets too close. It drops coins when attacked, and stronger attacks yield more coins. The Player has 1 minute to find it, and 2 minutes to vanquish it. If not vanquished in time, it digs into the ground and escapes.

Treasure Yeti once again appears in Garden Ops as a bonus boss and still possesses its traits from the previous game. It can also appear in the Backyard Battleground with the same behavior, but does not summon any Imps there.

Treasure Yeti appears as a Champion in the mission "I Treasure You" given by Tenderleaf, as well as appearing in plant-free roam regions at random points when a mission is not active. It has the same behavior as in the previous games.

It is best to let two members of your team focus on the Yeti while you and the other member of your team defend the garden from the other zombies. If all of your teammates are chasing the Yeti, you should not get too greedy. Zombies will still attack the garden so you must go to the garden and try to defend it.

You can use a Citron to take the Yeti easier, as his Juice Cannon appears to be quite powerful against it. Not only that, but he can also sprint in all directions and use the Spin Dash ability in case if it tries to run away, as well as using the Peel Shield to block incoming attacks, increasing your chance of surviving. Try camping near the plant base (in both Town Center and Mount Steep) as the Strange Well is located near it and the Yeti will also spawn nearby, which will save you a lot of effort once you pick the Crystal Dog up. After vanquishing it, clear the area of zombies quickly before picking up the Crystal Dog, as it will vanish if it's left for too long. Finally, head to the Strange Well carefully while trying to not get yourself vanquished by zombies (if any of them are present), as you will become extremely vulnerable against attacks; even a hit from a TV Head's projectile or a Browncoat's bite can reduce your health by 10 or more points, and if you get vanquished, the Crystal Dog will also disappear, requiring you to start over. Use the Peel Shield to cover yourself against them, and attack the zombies if there's too many of them. 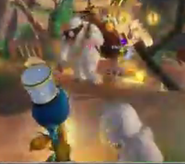 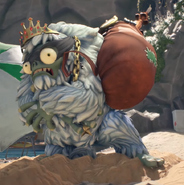 Treasure Yeti in Battle for Neighborville