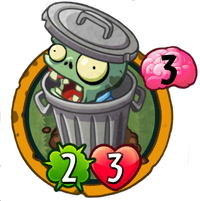 For the version in Plants vs. Zombies, see Trash Can Zombie.

When revealed: This can't be hurt this turn.
It's dark and quiet in there. He finds it soothing. That's what no one gets.

Trash Can Zombie is a premium uncommon zombie card in Plants vs. Zombies Heroes, and a member of the

. He has the Gravestone trait, and his ability shields him for the current turn once he is revealed.

His trash can resembles the one seen on the zombie with the same name, although Trash Can Zombie hides in the trash can instead of holding it.

It's dark and quiet in there. He finds it soothing. That's what no one gets.

Since Trash Can Zombie is invulnerable to all attacks when revealed, you should play him either in front of a plant to stall a turn while damaging that plant further or any empty lane to hit your opponent for 2 damage.

Additionally, he can take out most weak plants, so using him to guarantee a kill can be useful. If plants like Wild Berry and Carrotillery are threats to you, you can use Trash Can Zombie to block their attacks and subsequently destroy them. Trash Can Zombie can also be a good counter to Re-Peat Moss, as Trash Can Zombie has the Gravestone trait, and combined with his ability, he can block Re-Peat Moss for an entire turn. However, Grass Knuckles can play Template:PvZH Link and Gardening Gloves, while Green Shadow can play Grave Mistake, so beware of these cards.

If you predict Trash Can Zombie being played, play a weak plant such as Small-Nut or Template:PvZH Link to waste his ability.

Retrieved from "https://plantsvszombies.fandom.com/wiki/Trash_Can_Zombie_(PvZH)?oldid=2012408"
Community content is available under CC-BY-SA unless otherwise noted.