For the version in Plants vs. Zombies Heroes, see Trash Can Zombie (PvZH).

A can of trash makes him slower but stronger.

Moves slow; very slow in Versus Mode
Has a trash can shield to protect itself from peas and spores

Versus Mode, Co-op or Survival (console)
Trash Can Zombie is a zombie exclusive to the Xbox 360, PlayStation 3, and Nintendo DS versions of Plants vs. Zombies that can only been seen in Survival: Fog, Survival: Roof, hard survival levels, Survival: Endless, Co-op Endless, and as a selectable zombie in Versus Mode.

Trash Can Zombies are zombies holding a trash can for use as armor, negating the freezing effects of any Snow Peas hitting it or the splash effect of torched peas, but since Winter Melons throw their melons over the trash can, they can hit the zombie. Because of the weight of the trash can, these zombies move very slow, and even after the removal of the trash can, it will retain its normal speed. These zombies are identical in all respects to Screen Door Zombies, except for a difference in shield damage absorbency and speed.

This is only on console versions.

Magnet-shroom can be used to take away the trash can, turning Trash Can Zombie into a slow normal zombie. Lobbed-shot plants simply throw projectiles over the shield, damaging the zombie directly, making the shield useless. It is a good idea to use Cabbage-pults, Kernel-pults, Melon-pults, Winter Melons, Fume-shrooms, Gloom-shrooms, Spikeweeds, and Spikerocks in hard levels to negate the protection of the trash can. Melon-pults are much more useful. However, since Trash Can Zombies appear a bit later in the rounds when there are large groups of zombies to begin with, the chances of a Cabbage-pult or a Kernel-pult actually killing one are slim. The trash can also negates the splash effect of fire peas. You should not try to hypnotize it though, as the trash can does not protect it against other zombies like other shield zombies, making them very weak allies compared to the Football Zombie or Buckethead Zombie, since they will eat them, thus wasting your sun. However, Gargantuars, Zombonis, or any zombie that never eat plants don't kill it, but you don't need this to hypnotize it. Instant-kills work normally on the Trash Can Zombie.

Many people feel that Trash Can Zombies are worthless for Versus Mode, mainly due to their very slow speed of movement, but they are actually very useful if used in combination with other zombies. Their high health and low cost make them a good choice to clear a row of plants. They also work well with Football Zombies. As Football Zombie charges forward in the lane and eats the plants, it will protect the Trash Can Zombie long enough for it to move down the lane and finish off the last few plants if the Football Zombie is killed. Trash Can Zombie can be also used as a cheap shield to protect the gravestones and Target Zombies in sudden death when you cannot plant any more gravestones, making it kind of similar to a zombie counterpart to Wall-nut. However, he will still be slow as he loses the trash can. 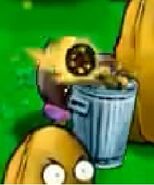 A stolen trash can 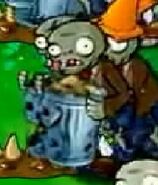 A Trash Can Zombie in game

Trash Can Zombies in the seed selection screen

A lot of Trash Can Zombies

Another Nintendo DS Trash Can Zombie. Note the black border on the trash can.

A hypnotized DS Trash Can Zombie

A buttered DS Trash Can Zombie

Disgusted Trash Can Zombie
Add a photo to this gallery

Retrieved from "https://plantsvszombies.fandom.com/wiki/Trash_Can_Zombie?oldid=2357686"
Community content is available under CC-BY-SA unless otherwise noted.