Trash was a collaborative term for all of the items that accumulated in the Player's Town over periods of time or after a Zombie Sneak Attack. Wherever trash piled up, plants, decorations, and other placeables could not be placed until it was removed. To remove the trash, the player had to simply click on the unwanted trash to remove it. Doing so gave one XP point for each piece of trash removed. All of the trash (except from rocks and tall grass) was a part of a certain zombie in Plants vs. Zombies Adventures. 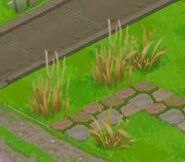 Zombie's trash (his shirt and tie)

Barrel Zombie's trash (wooden planks and the cork from the barrel)

Weightlifter Zombie's trash (his disassembled barbell and his bandana)

Gas Can Zombie's trash (his damaged gas can)

Gargantuar Zombie's trash (the top of his telephone pole)