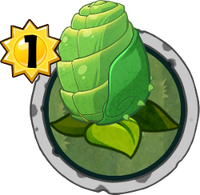 Transmogrify is a super-rare plant superpower trick card in Plants vs. Zombies Heroes, and a member of the

, including it if that zombie costs 1

It is based on the real meaning of transmogrify, the ability to transform in a surprising or magical manner.

Transmogrify can be a great way to make a very powerful zombie into a weak one. On most occasions, the zombie will turn into a weak zombie, like Template:PvZHLink. However, on other occasions, it could turn it into more dangerous ones like Leprechaun Imp. On some occasions, it can also turn the zombie into the same zombie as before, basically wasting the superpower. As such, it should only be used on zombies with very high stats, either by default such as Template:PvZHLink, or via the use of tricks, and not against weaker, less threatening zombies.

Because you cannot tell what zombie comes out from playing Transmogrify, it is wise to play this first before playing anything else. That way, you can deal with any unintentionally transformed threat such as Tennis Champ or Mini-Ninja much more easily.

Just be careful if Unlife of the Party is on the field, as transforming a zombie counts as playing a zombie as well. However, this only applies when his stats are low, as playing this trick is a way of lowering his stats.

Double Strike plant is about to be destroyed, playing Transmogrify in front of it may benefit the

Double Strike plant as it will weaken the zombie and allow the plant to plow through the zombie and then hit the hero. However, since neither Rose nor Citron have access to cards associated with

Double Strike normally, they'll have to get Coffee Grounds via Mayflower or Cosmic Bean.

For easy reference, here is the list of all current 1

cards that the zombie can transform into:

If this superpower is played in the early-game, it is not that much of a big deal as you can still rebuild your setup. However, this superpower could possibly ruin you if it is used on a powerful zombie of yours, especially if you used lots of boosting cards. Having many small threats out at once so that you aren't completely helpless is the best solution against tricks like these, as Transmogrify is only playable once per game.

You can also play Unlife of the Party to make your opponent think twice before playing this trick.

AI opponents in single-player missions sometimes use this on zombies that already cost 1 brain, which can possibly give you an advantage.

Transmogrify's statistics after being Conjured by Bird of Paradise

Transmogrify being used on Conehead

Transmogrify being used on Undying Pharaoh

Retrieved from "https://plantsvszombies.fandom.com/wiki/Transmogrify?oldid=1958053"
Community content is available under CC-BY-SA unless otherwise noted.