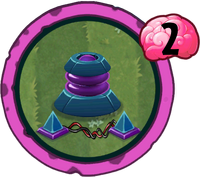 Start of turn: Transform the Zombie here into a random Zombie that costs 1

to play, and its ability transforms the zombie in it into another random zombie that costs 1

more than it at the start of every turn, starting from the turn after the zombie is played in it. This ability does not activate on Trickster as there are no other zombies that are more expensive than it.

Its description is an allusion to an ability.

According to the Transformation Station brochure, every Zombie who visits is guaranteed to shuffle away feeling like a brand new Zombie.

This environment can make a single zombie powerful over time if you manage to keep that zombie alive. It is best to play a high brain zombie as early as possible to start transforming into another zombie that is 1

higher than their cost, thus getting powerful zombies within fewer turns than playing a 1 brain cost and requirements for a couple of turns for stronger zombies.

If you want to rely on this environment more than other cards, you can use Flag Zombie or Gargologist to play high brain zombies very easily and make them transform into powerful zombies quickly and earlier. You can also ramp up more brains using Cryo-Brain or Medulla Nebula to play expensive zombies earlier.

zombie which if it survives, it can start turning into 4

zombies and better each turn. Zombie King can benefit other zombies that are in this environment because if the zombie transformed by Zombie King is in Transformation Station, you will immediately get either an Octo Zombie or a Zombot Plank Walker next turn as they are the only zombies that costs 8

. However, only Rustbolt can use Zombie King and Transformation Station together normally.

However, this environment is luck-based as although it can give you powerful zombies such as Zombot Sharktronic Sub or useful ones such as Quasar Wizard, it might also give you weak ones such as Conehead or ones that do not synergize with your deck such as Flamenco Zombie in a non-dancing deck or Mad Chemist in a non-trick deck. Regardless, the zombie made will be more threatening than its previous form, forcing your opponent to think more defensively, and the bright side is that it will be a higher cost zombie instead of a fully randomized zombie. However, beware of the possiblity of weakening zombies like transforming Captain Deadbeard into Mountain Climber, which will not activate her ability and thus, result in a much weaker zombie.

The benefit for this environment is that the zombie will always be transforming whenever it manages to stay alive within 1 turn. This means that unless it is fragile like Exploding Imp or Abracadaver, you do not have to worry about its health, nor have to use health-boosting cards such as Camel Crossing and Loudmouth unless a plant can destroy that zombie in 1 turn.

If you have Unlife of the Party on the field, he will boost himself every turn, since the zombie that is made from Transformation Station counts as playing a zombie. However, only Professor Brainstorm can do that normally.

Regardless, avoid playing Trickster in Transformation Station as he is the only zombie that will not be able to transform even when this environment's ability activates. Also, as Immorticia, do not play Zombie Yeti or Cosmic Yeti, as their Bounce ability will activate before the environment's ability, while as either Super Brainz and Huge-Gigantacus, do not play any Gargantuars on Transformation Station while Cursed Gargolith is on the field, as its ability will hide all Gargantuars in a gravestone before the start of next turn, preventing them from being transformed.

This environment can allow the zombie hero to obtain powerful zombies early on in the match. You need to find a way to prevent the zombie from being transformed before the end of the turn. Either Bounce it with Spring Bean or Jumping Bean or destroy it with instant-kill tricks such as Lawnmower and Squash. Alternatively, you can play Brainana to make the zombie hero be unable to play it for that turn or get rid of it with your own environment, preferably a cheap one like Coffee Grounds. However, if you wish to do that, you can only get rid of it the following turn, since zombie environments are played in the Zombie Tricks phase. This strategy is more effective if this environment is played without a zombie in it.

Three-Headed Chomper can destroy the zombie inside before it transforms.

Three Transformation Stations on the ground

Transformation Station being overridden by Venus Flytraplanet
Add a photo to this gallery
Retrieved from "https://plantsvszombies.fandom.com/wiki/Transformation_Station?oldid=2364251"
Community content is available under CC-BY-SA unless otherwise noted.