Blows bubbles with his toy gun that can carry your plants away.

Toy Gun Imp Child wears a striped shirt and a hat resembling a bear, and carries a fish-like bubble gun. He wears red shoes and what appears to be a red scarf flying behind him like a cape. He also has a pair of glasses on his neck.

If you are expecting him, use the Blover to remove the bubbles. Try to kill him as fast as you can if that solution fails.

About to blow a bubble 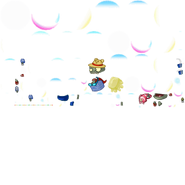 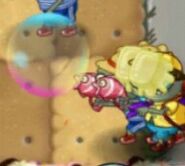 Two buttered Toy Gun Imp Childs. One has its bubble half out.

Toy Gun Imp Child hidden in a vase from Vasebreaker 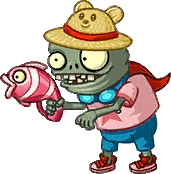 Retrieved from "https://plantsvszombies.fandom.com/wiki/Toy_Gun_Imp_Child?oldid=2341284"
Community content is available under CC-BY-SA unless otherwise noted.