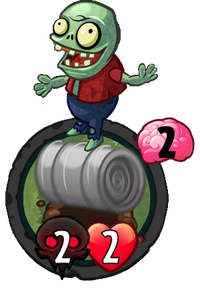 Deadly.
All the radioactive glow... none of the super powers.
Toxic Waste Imp is a premium super-rare zombie card in Plants vs. Zombies Heroes and a member of the

. It has the Amphibious trait, and its ability gives all Imp zombies on the field, including it and any damaging Imp tricks, the

Deadly trait. This ability persists until all Toxic Waste Imps are removed from the field.

The Imp riding the barrel is based on the Imp from PvZ2. His Deadly trait references to how radiological/biological hazmat can be extremely harmful to living organisms, while his amphibious trait may refer to how some HAZMAT barrels can float on water and contaminate them.

Its description is a reference to how some superheroes obtain superpowers after contact with radioactivity.

All the radioactive glow... none of the super powers.

Toxic Waste Imp's stats are only average for its cost, but the trait and ability makes it one of the most useful zombies in not only an Imp deck, but in any deck that has a good number of Imps. Toxic Waste Imp's existence spells doom for any plant fronting an Imp as long as the imp has at least 2 strength and if it can't be hurt. Due to its Amphibious trait, some opponents may struggle to take it down before it causes major trouble. Generally, you should swarm many Imps to maximize its ability. An exceptionally good example is Hot Dog Imp, who can clear two plants at once and also hit your opponent due to his

Strikethrough trait and 2 base strength.

Since it is an Imp zombie, it synergizes well with Imp Commander, and since Toxic Waste Imp is also Amphibious, it is easier for it to strike your opponent as some heroes (Chompzilla, Captain Combustible, Solar Flare) do not have Amphibious plants. But still, be warned as Captain Combustible and Solar Flare have damaging tricks to remove it, Chompzilla also has removal tricks. There is also the possibility of them conjuring an amphibious card

As Impfinity, you can play Cakesplosion as if it were a cheaper Locust Swarm or use Stupid Cupid, so long as the targeted plant can take damage. Super Brainz and Huge-Gigantacus can teleport Toxic Waste Imp to guarantee its safety for a turn, and they also have efficient card supplying options in case Imp Commander fails. And finally, Neptuna and Brain Freeze have boosting cards to keep Toxic Waste Imp for longer.

However, Toxic Waste Imp's bane is shielding. If an enemy plant can't be hurt, its ability would be for naught, so be on the lookout for them and prepare hard removal cards.

When your opponent plays Toxic Waste Imp, you should prioritize on destroying it as its ability allows Imps to devastate any plant, and given how cheap many Imps are, the results may be detrimental. Thankfully, many low-cost cards like Sea-Shroom, Berry Blast, and Banana Bomb can destroy it at once, though if you don't have them at hand it can be a serious problem.

Deadly zombies from destroying plants instantly. However, there are only so many of them, and the opponent could use imps with 2 or more strength as well as stat-boosting cards to get around it. Shielding is also vulnerable to cards like Rocket Science, Locust Swarm, or even a Pogo Bouncer.