Although the Toxic Pea has a very radiant personality, he constantly complains that everyone feels so distant...

Toxic Pea deals toxic damage to Zombies just by standing near them!

The Toxic Pea Cannon is the primary weapon of Toxic Pea; all facts below apply to a fully upgraded weapon.

The Toxic Pea's primary weapon is the Toxic Pea Cannon. It deals 17 to 25 impact and critical damage depending on the distance. It deals the same amount of splash damage as the normal Peashooter which is 10. It will also deal 3 ticks of 2 toxic damage. The toxic effect is triggered by damaging the enemy, or standing close to the enemy.

Grown from the most toxic plant food, the Toxic Pea has a decreased reload time.

The Toxic Pea makes zombie teamwork hazardous. The Toxic Pea shoots peas that deal damage equal to the Goop (Chomper's ability), and possess a damage model comparable to the normal variant. He is great for crowd control with his toxic damage lasting for two to five seconds, dealing 2 damage every second. When targeting enemies in long range, splash damage can be extremely helpful since it also triggers the poison effect, making the Toxic Pea ideal at suppressing enemies. With the ability to trigger poisoning with both impact and splash damage, the Toxic Pea excels at wearing down high health zombies, chipping away the health of weaker zombies as well as being good for breaking up group rushes. when playing as the Toxic Pea it is important to know that the player does not require a lot of accuracy, this variant provides a lot of splash damage making the gameplay easier and much better for any player.

The Toxic Pea is also useful for providing harassing fire at enemies from high vantage points since if they turn their attention towards the Toxic Pea, they will most likely be unable to monitor their flanks and the ground they stand on, which can allow a stealthy Chomper to devour an entire group of zombies if they will not shift their attention away from the harassing Toxic Pea to see why their teammates are taking damage.

Try not to attack him in crowds as this will only maximize the damage it deals. Use a zombie with very high health (All-Star) or one that is very long-ranged (Camo Ranger or Painter but beware that the Toxic Pea excels at suppressing and harassing snipers) or one that is capable of moving very fast (A warping Scientist). Warp can allow you to dodge most of the damage until you get close while Energy Warp can allow you to traverse a Toxic Pea-infested path and try to get close enough to deal with them. is important to now that most of the times this variant will be located at places that are far away from zombies, like roofs. dealing with this situations can be quite difficult, it is recommended to use a sniper and take it down as soon as possible due to the fact it can deal a lot of damage to any zombie near or far away.

However, try not to get too close to it as this will poison you instantly. 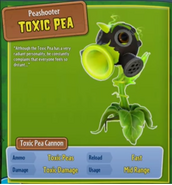 Toxic Pea with the Camo Ranger 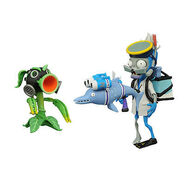 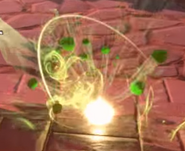 The splashing effect
Add a photo to this gallery

Retrieved from "https://plantsvszombies.fandom.com/wiki/Toxic_Pea?oldid=2373417"
Community content is available under CC-BY-SA unless otherwise noted.