Super Rare
"Toxic Citron wears goggles under his helmet not because he needs to protect his eyes, but because he thinks they make him look really hip."
Toxic Citron is the Super Rare toxic variant of Citron in Plants vs. Zombies: Garden Warfare 2. He was added in the Trouble in Zombopolis: Part One DLC .

Toxic Citron is based off of a lime, which is a green citrus fruit.

"Toxic Citron wears goggles under his helmet not because he needs to protect his eyes, but because he thinks they make him look really hip."

Toxic Citron's weapon is called the Limer Slimer. It has 20 ammo and is fully automatic. Like the Park Ranger and Alien Flower's primary weapons, the Limer Slimer's attacks will create clouds that deal damage over time to Zombies, and have minor splash damage. Like most toxic variants, zombies that either stand near him or are hit by his primary weapon will be poisoned, taking residual damage afterwards.

Toxic Citron's Primary Weapon can be considered the plant counterpart of the Park Ranger's Stenchy the Skunk but with a lower rate of fire but with the added benefit of more ammo and a toxic effect. It may be difficult to accustom to him but with practice Toxic Citron can become powerful in the hands of a skilled player. Staying behind walls and occasionally poking out to shoot at enemies is a great strategy as the toxic damage will slowly wither their health down. A Super Brainz or Captain Deadbeard using their close-range weapon will suffer from his toxic aura. It is the perfect counter for Imps as it can deal splash damage against them. Keep in mind that while in Citron Ball form he loses his toxic aura. This can make Toxic Citron a force to be reckoned with.

The Limer Slimer has similar firepower as The Park Ranger's primary weapon but has an added toxic effect. Use it like you would with the Park Ranger. Using Citron Ball removes your toxic aura and gives off an audio clue that can alert zombies to your presence. Beware of this and switch in and out of Citron Ball away from zombie players. The lingering clouds left behind by a shot from the Limer Slimer can make countering Imps easy. The toxic effect chips away the health of Z-Mechs quicker so use that to your advantage. Use his abilities the same way as you would with any other Citron: use EMPeach on Imps and Z-Mechs; use Peel Shield early when taking damage; use Hyper Ball to escape sticky situations or traverse the map quicker and finally use Spin Dash to knock away troublesome Browncoat Zombies or Imps. Make sure your fights are medium to close range, as that is where you are most effective.

Many players may treat his primary weapon like the Park Ranger's primary weapon. If you are playing as Super Brainz or Captain Deadbeard or their variants, use long range more than close range to avoid the toxic aura so you cannot be hit by it. His abilities are no different. Counter them normally as they remain unchanged. Even so, don't get too focused on his primary weapon as he can use his abilities to vanquish you. 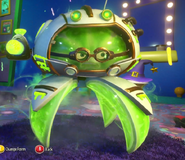 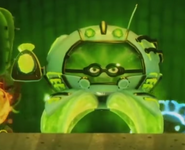 Toxic Citron in a trailer video

Toxic Citron in the customization menu

Toxic Citron in the Too Fast, Too Noxious Mystery Portal image