Attacks with a ranged spray

Rare (reach level 10 with Chomper)
The Toxic Chomper is, well.... Toxic! He enjoys getting in close to Zombies and damaging them with his toxic aura.

Attacks with a ranged spray

Rare
The Toxic Chomper is, well.... Toxic! He enjoys getting in close to Zombies and damaging them with his toxic aura.
Toxic Chomper is the Rare toxic variant of the Chomper in Plants vs. Zombies: Garden Warfare and a Super rare toxic variant in Plants vs. Zombies: Garden Warfare 2. Toxic Chomper replaces the normal Chomp ability with Toxic Spray and can spew poison from his mouth. As long as his toxic spray is activated, he can affect multiple targets directly in front of him. The toxic spray's damage is six continuously, much less than a regular chomp, but it has the advantage of affecting a large area and has a damage-over-time effect.

Another benefit to the toxic spray is that it bypasses additional defenses on Spawnable Zombies such as screen doors, coffins, barrels, and outhouses, making short work of heavily defended zombies, similar to Fire Chomper. The Toxic Spray damage is ineffective against objects such as tombstones and teleporters. Spraying for too long will result in overheating, and Toxic Chomper will be forced into cooldown, like the All-Star variants' primary weapons.

Toxic Chomper also gives off a toxic aura that minimally damages enemies when in close vicinity to him. However, this toxic aura can alert the enemy of his presence, who may or may not see him coming. Alternatively, his low damage makes him one of the less dangerous toxic variants.

The Toxic Chomper is, well.... Toxic! He enjoys getting in close to Zombies and damaging them with his toxic aura.

Toxic Chomper deals toxic damage to Zombies just by standing next to them!

Toxic Spray is the primary weapon of Toxic Chomper. It is a spray weapon that shoots a stream of player-damaging particles when fired. It continually deals eight damage to any player getting hit by it, far less damage than the default Chomp, but it can affect multiple targets, deal damage over a wide area, and has a longer range than the regular Chomp.

Very toxic stomach acids break down Zombies in a hurry. 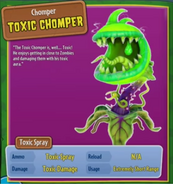 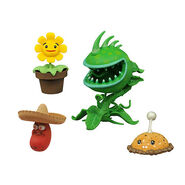 Toxic Chomper in a customization booth

Toxic Chomper in the Too Fast, Too Noxious Mystery Portal image 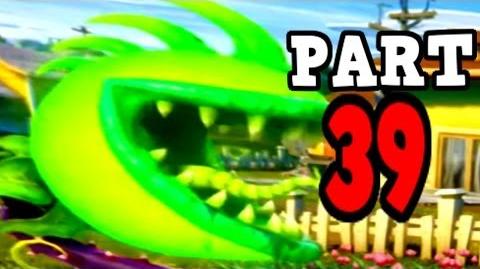