Legendary
With the help of his (mostly) sealed hazard suit, and a constant chemical bath, Toxic Brainz is able to keep his skin looking its greenest.
Toxic Brainz is the Legendary toxic variant of Super Brainz in Plants vs. Zombies: Garden Warfare 2. Similar to other Legendary variants, he has a passive ability activated by his super meter being filled. Toxic Brainz's legendary meter is called "Toxic Overload." Unlike other Legendary characters which require vanquishes to fill the meter, the Toxic Brainz only requires successful punches. Once the meter is full, the player will receive a temporary speed and damage boost as well as damage resistance. Toxic Overload will also strengthen his Toxic Aura for the duration of the ability.

With the help of his (mostly) sealed hazard suit, and a constant chemical bath, Toxic Brainz is able to keep his skin looking its greenest.

Fill his Toxic Meter by punching foes. Fill it all the way to inflict extra damage while moving extra fast!

Toxic Brainz is weak when using his capabilities without charging his meter, as his punch combo damage is 10-20-30, and his beam does a measly 2-4 damage with each damage indicator. This makes building his meter difficult since his damage is very lackluster, and enemies probably will not fear you until your meter is fully charged. Once charged, Toxic Brainz is capable of dishing out some serious punches, and getting a good speed bonus to go along with this. His punch combo damage will now do 30-60-90, and his beam is capable of dealing 10 damage per damage indicator, making him a force to be reckoned with.

As such, try to target weaker plants that cannot defend themselves easily with your punches, such as Sunflowers. The Toxic Beam should rarely be used outside of Toxic Overload, since it does not fill up the super meter. This character is most effective when attacking multiple grouped up plants, as the more you hit, the faster your meter fills.

Using the legendary meter upgrade is recommended, as it takes down the number of punches from 15 to 10.

Torchwood and Citron are probably the two best plants to attack when needing to charge up your meter, due to their high health. But watch out for Blazin' Blast, and EMPeach, as they could make you lose the fight. Also watch out for Peel Shield/Mood Shield, as they do not fill up your meter when punching it.

Toxic Brainz is not capable of dealing much damage to you without his meter, however he can build it surprisingly quick and reliably against one target, try to not be alone and defeat him as soon as possible to prevent him from activating his meter. If you see a Toxic Brainz powered up, try to work together with your allies to defeat him, or use your high damage abilities against him right away, as he is capable of doing 180 damage with three punches against you in his Legendary mode, and his heightened speed makes it virtually impossible to escape his deadly combo. Chompers and Skilled Cactus players are reliable counters (as well as any ice plant variant).

Toxic Brainz is a Legendary variant, meaning that he is extremely hard to find stickers for him in sticker packs, and like any other Legendary, he cannot be unlocked in Phenomenal Character Packs. However, only two stickers are needed to unlock him. The best strategy to get him is to buy the Wonderous Packs of Greatness, because they have the highest chance of getting a Legendary. 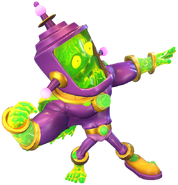 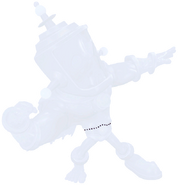 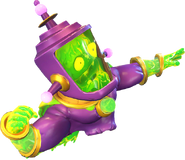 Toxic Brainz in the customization booth

Toxic Brainz in the "League of Awesome" quest

Mastered version of the bobble-head

Toxic Brainz in the Too Fast, Too Noxious Mystery Portal image