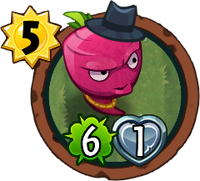 for each Plant and Zombie.
He grew up on the wrong side of the garden.
Tough Beets is a premium rare plant card in Plants vs. Zombies Heroes and a member of the

Armored 1 trait, and his ability gives him +1

for each plant and zombie on the field, excluding him, when he is played.

He is based on a beet and a stereotypical tough guy.

His card description may be the cause how he ended up being a tough guy.

He grew up on the wrong side of the garden.

Armored trait is also helpful, making him immune to zombies that have only 1

and improving his overall survivability greatly.

Strategies for Super-Phat Beets should apply to Tough Beets too; just like Super-Phat Beets, it is heavily not recommended to use this card if there are few plants and zombies on the field, as he will get very little health. Also, do not play this card in Total Eclipse, as the environment will destroy Tough Beets before he activates his ability, turning him into a waste of sun.

Due to his root tribe, he can also be used in conjunction with Starch-Lord to give him a minor boost along with his major health boost when he is played.

Armored trait makes it very difficult for you to take him down too, as any attack will do 1 less damage. Therefore, the best strategy is to play an instant-kill, as it ignores his

Sneaky heroes can also make use of

Deadly zombies to destroy Tough Beets regardless of his health, as well as Backyard Bounce. Lowering its strength using Shrink Ray or Landscaper is also an option, although depleting all his strength is a waste of cards.

Also, while it is not required, it is recommended to remove any Starch-Lords from the field before Tough Beets is played, as they can raise his strength to at least 7

, which is quite powerful for a 5

Retrieved from "https://plantsvszombies.fandom.com/wiki/Tough_Beets?oldid=2285625"
Community content is available under CC-BY-SA unless otherwise noted.