Carries a torch that instantly destroys plants and scorches the earth.

(via Plant Food only)

(cannot be burned while bouncing)

(cannot be burned when hiding)

(forces the zombie to eat it)

Ancient Egypt - Day 30
Torchlight Zombie has no fear of the dark. That's not because he's always got a torch, however, but rather because as a zombie he has no capacity for fear in the first place.
Torchlight Zombie is a zombie encountered in the extension levels of Ancient Egypt in Plants vs. Zombies 2. He is an upgraded version of Explorer Zombie.

Torchlight Zombie's design is similar to the Explorer Zombie. However, he carries a larger torch, as well as his shirt and hat are on fire.

Carries a torch that instantly destroys plants and scorches the earth.

Torchlight Zombie has no fear of the dark. That's not because he's always got a torch, however, but rather because as a zombie he has no capacity for fear in the first place.

The Torchlight Zombie burns plants just like an Explorer Zombie, but he is much faster and tougher than his basic counterpart, making him even more dangerous to your defenses. The best way to handle him is to use any plant with a freeze or chill effect, such as Winter Melon or Iceberg Lettuce. Cold Snapdragon is also fantastic against them due to their ability to extinguish their torches, as well as being very cheap and easy to repeatedly plant. Against groups of them, use Plant Food on an Iceberg Lettuce to extinguish all of their torches. In a worst case scenario, you can use Power Snow as a last resort. When you have extinguished the torch, Stallia and Primal Peashooter are an effective combo, as they can slow him down and knock him back at the same time. If Winter Melon and Pea Pod are at max level, you can use them together and the Torchlight Zombies will be outmatched easily. Hurrikale is also powerful against it due to its chill effect nullifying an entire lane, leaving a potential group of these zombies helpless.

Though not as powerful as the chilling or freezing plants, Sap-fling helps with speed and control, allowing you to handle them more easily. However, it is still important to keep in mind that Sap-fling deals no damage, so you will need an offensive plant to actually kill him.

Just like the Explorer Zombie, the Torchlight Zombie cannot burn the Plant Food shields of Moonflower and Infi-nut, so they can be used to stall those zombies fairly effectively.

Other strategies that work against Explorer Zombies can also work against Torchlight Zombies. You can use underground plants like Spikeweed, Spikerock, Celery Stalker, and Cactus, as they cannot be burned while underground. Note, however, that they do not attack fast enough to land multiple hits on Torchlight Zombie, so they may not be the most ideal plants. Ghost Pepper can't be burned and can get multiple hits in on the zombie, therefore is a viable option against it.

Note: Chard Guards, Chompers, Parsnips, and Guacodiles are useless, as Torchlight Zombie will destroy them before they even have the chance to attack. However, if you plant Guacodile directly on his tile, the Guacodile's rush attack will trigger instantly, damaging the Torchlight Zombie.

Torchlight Zombies with Excavator Zombies are a very dangerous combo as they both move very fast. While Excavator Zombie's shovel will absorb most of the plant's projectiles and protect other zombies, Torchlight Zombies can instantly destroy many plants, especially when plants are thrown three tiles back by an Excavator Zombie. This doesn't apply, however, if the player feeds an Infi-nut a Plant Food. The resulting barrier can't be burned or shoveled, therefore they will have to eat their way through, giving you more time to destroy them. Torchlight Zombie, Newspaper Zombie, and Mummified Gargantuars are also a very deadly combo. To prevent them from incinerating your defenses, it is recommended that the player brings ice plants. Newspaper Zombie is most vulnerable to Poison Effects so use the Goo Peashooter or Shadow-shroom to take it out, then take out the others. 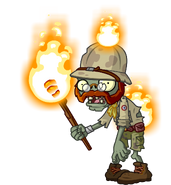 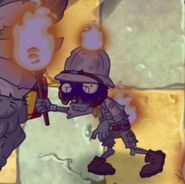 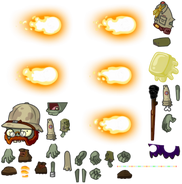 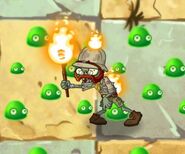 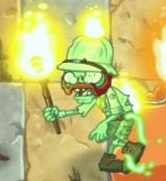 A hypnotized Torchlight zombie, only possible with Caulipower. 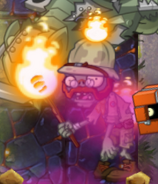