The burning flame limits his speed of rotating.

For the other variants, see Torch Kongfu Zombie or Explorer Zombie.

Torch Monk Zombie (火把武僧僵尸; pinyin: huǒbǎ wǔsēng jiāngshī) is a zombie appears in Kongfu World in the Chinese version of Plants vs. Zombies 2. It is a reskinned version of the Torch Kongfu Zombie which can be summoned by a Monk Zombie coming into contact with a Weapon Stand with a torch. Like Torch Kongfu Zombie, he will instantly destroy plants that come in contact with him.

Torch Monk Zombie is essentially a faster but weaker version of Torch Kongfu Zombie. While more fragile, his speed can make him a threat, as he could burn more plants than its Kongfu counterpart. Plants such as Snow Pea should be used to extinguish his torch. 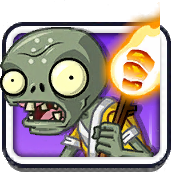 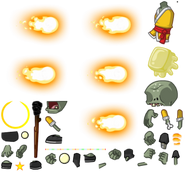 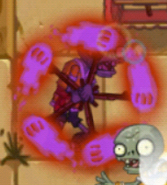 Retrieved from "https://plantsvszombies.fandom.com/wiki/Torch_Monk_Zombie?oldid=2356559"
Community content is available under CC-BY-SA unless otherwise noted.