For the other variants, see Torch Monk Zombie or Explorer Zombie.
For their appearance in Plants vs. Zombies: All Stars, see Torch Kung-Fu Zombie (PvZ: AS).

Carries a torch that can instantly destroy your plants.

To tell the truth, Torch Kongfu Zombie is an ancestor of Explorer Zombie in Egypt.

Torch Kongfu Zombie (功夫火把僵尸; pinyin: gōngfū huǒbǎ jiāngshī) is a zombie that appears in Kongfu World in the Chinese version of Plants vs. Zombies 2. They are the Kongfu World variant of the Explorer Zombie from Ancient Egypt. They have a Monk variant within later levels of Kongfu World.

Since they are practically identical to Explorer Zombie, do whatever you do to kill Explorer Zombie to them, like using Winter Melon, Snow Pea, Cryo-shroom or Cold Snapdragon. Just don't let them get near your plants because like their counterpart, they will instantly burn them. You can use Iceberg Lettuce to freeze them and extinguish their torch. You can also use Hurrikale because not only can he use his freezing ability to extinguish the torch, but he can also push the zombie away from your plants. 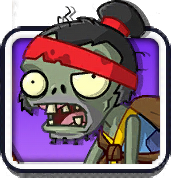 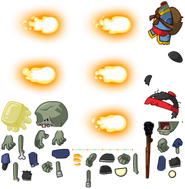 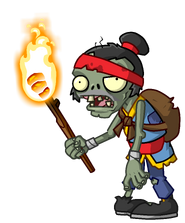 Retrieved from "https://plantsvszombies.fandom.com/wiki/Torch_Kongfu_Zombie?oldid=2324005"
Community content is available under CC-BY-SA unless otherwise noted.