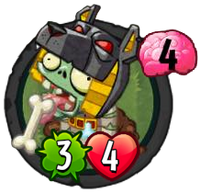 When this hurts the Plant Hero, make a random Gravestone in a random lane.
He's good at making friends.

Tomb Raiser Zombie is a premium super-rare zombie card in Plants vs. Zombies Heroes, and a member of the

His description alludes to the fact that his ability is able to make more zombies, thus literally making more "friends."

Tomb Raiser Zombie's ability is great for bringing more zombie fighters into the battle for virtually free, and on top of that, they will be hiding in gravestones, which protect the lane until the next Zombie Tricks phase unless Grave Mistake, Template:PvZHLink, or Blockbuster is played. Since he makes an extra zombie when he hits the plant hero, he synergizes well with Unlife of the Party (as Impfinity), as each gravestone revealed counts as playing another zombie.

If you are using the former method, moving him to an empty lane with tricks like Smoke Bomb is a good way, as your opponent cannot do anything during the Zombie Tricks phrase. Bonus attack cards like Carried Away (as Template:PvZHLink) or Lurch for Lunch are another option, as they allow Tomb Raiser Zombie to either destroy a plant in his way or make more gravestones. However, Tomb Raiser Zombie must have sufficient strength boosts to destroy plants, which the Brainy class is not good at giving. And finally, you can remove the plants blocking his way by either destroying or Bouncing them with tricks.

If you want to use the latter way, make sure you have some brains left over for stat-boosting tricks, because with the stats of 2

Frenzy trait by playing Possessed or Maniacal Laugh can let him attack the plant hero if he manages to destroy all the plants in the lane with his attack as long as he still survives. Headstone Carver gives Tomb Raiser Zombie a small head start for a cheap price, as well as any future zombies made by Tomb Raiser Zombie, so he isn't that bad of an option either. Tomb Raiser Zombie can also be paired with certain environments to give him a greater chance of activating his ability. Notable environments include Laser Base Alpha, Moon Base Z (as Impfinity), and Ice Moon (as Huge-Gigantacus), which give him traits that can easily hit the plant hero. Stat-boosting environments like Meteor Z, Cone Zone, and Area 22 are also good choices, but keep in mind that environments can be replaced.

However, do be reminded that this zombie's ability is luck-based. While it adds an element of surprise and gives you access to powerful zombies like Surprise Gargantuar or even a legendary like Binary Stars, you could just as easily get zombies with situational abilities like Mad Chemist.

Tomb Raiser Zombie's statistics after being made by Template:PvZHLink 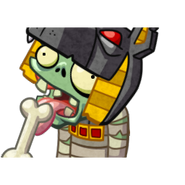 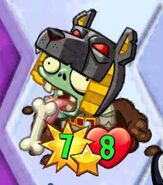 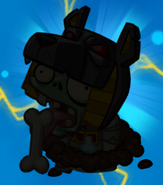 The player receiving Tomb Raiser Zombie from a Premium Pack

Tomb Raiser Zombie's statistics after being Conjured by Escape through Time

Gigantic Tomb Raiser Zombie due to a glitch

Tomb Raiser Zombie being the featured card in the menu for the June 28th, 2017 Template:PvZHLink

Retrieved from "https://plantsvszombies.fandom.com/wiki/Tomb_Raiser_Zombie_(PvZH)?oldid=1958687"
Community content is available under CC-BY-SA unless otherwise noted.