Turns invincible while being healed by the accompanying Scientists
Tiny is a bounty zombie in Plants vs. Zombies: Battle for Neighborville and can be found in Mount Steep. He is a Gargantuar who becomes invincible when he is being healed by the accompanying Scientists, who wear the "Foil Fanatic" costume and "Magnetic Magnificence" set. To complete the bounty hunt, the player needs to defeat him before he is able to reach his destination, indicated by a progress meter on top of the HUD.

His name is an example of irony, as he is very big despite what his name suggests.

Due to Tiny's ability, you need to take out the Scientists healing him first before you can deal any damage to him. A good way to do this is to use the Snapdragon and fire the Flame Blower at them. Once they are taken out, you need to constantly attack Tiny because another Scientists will show up later, increasing in amounts. Use all the abilities to deal damage faster. If you do this correctly you should be able to take him out fairly quickly. 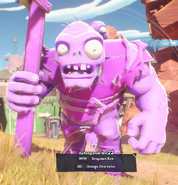