Not to be confused with Tiger Claw.

Acorns must be defeated first
Tiger Klaus is a Bounty Hunt character in Plants vs. Zombies: Battle for Neighborville. He resembles an Oak with the "Tiger Birch" costume and is accompanied by several Acorns, which are referred to in-game as "Klaus' Friends" and also wearing the same costume.

He can be fought in the Town Center with a 105-second time limit, and defeating him unlocks the Tiger Klaus is Coming to Town medal.

His name is a pun of "tiger claws" and "Klaus," a German, Dutch and Scandinavian given name and surname.

This is a relatively easy bounty hunt when performed with certain characters. The key is to take down the acorns quickly without damaging Tiger Klaus too much. It is best to do this on the casual difficulty as you'll take less damage, which is useful for this bounty hunt as both Tiger Klaus and the acorns will constantly throw Sap Traps at you, and there are no penalties for selecting that difficulty.

Use the Space Station and fire the primary weapon at the acorns as soon as they spawn, and if they link up with Klaus, just keep firing on them; the projectiles should hit the acorns seamlessly. When the third wave of acorns spawn, wait until all three of them get on top of Klaus, then quickly use Space Force and Crater Maker to quickly dispose of them as well as Tiger Klaus. He will then be left with very little amount of health remaining and you should be able to defeat him easily within a few shots.

Other characters suitable for this bounty hunt are the All-Star, Foot Soldier, and Electric Slide. Their primary is suitable for disposing of the acorns without much hassle, and their abilities allow you to kill Klaus quickly.

This bounty hunt can be used to farm tacos, allowing you to spend it for coins or customizations in this region, or to use the Plumbing Gig XP farming strategy if you run out of tacos. At a rate of approximately 900-1,000 tacos per hour, this is currently the fastest way to stock up on tacos.

Space Station is the most efficient character to do this. Equip the Assimilation upgrade, perform the above strategy to defeat the acorns, and make sure that you use both Space Force and Crater Maker for the third wave of acorns as soon as they link up on Tiger Klaus. Because the upgrade extends the ability's duration by 2 seconds, in most cases it can last long enough to be able to kill him. 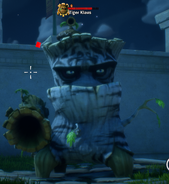