Flies over your plants.

Tiger Imp is a zombie in the Chinese version of Plants vs. Zombies 2. It is only encountered in the Evil Invasion Daily Challenge and is summoned by Gunpowder Devil. It has a rocket which can make it flies straight to your house really fast. The player must swipe the rocket or use Blover or Hurrikale to get rid of it. If the player uses his or her finger, when dropped down, it will then proceed as an Imp with triple speed.

Tiger Imp seems to be a Imp Monk in tiger suit, with a rocket tied to its back.

Tiger Imps while riding their jetpacks are extremely fast, at about the same speed as Zombie Chicken with the added threat of being untargetable, similar to zombies protected by Arbiter-X. Fortunately, they only appear if Gunpowder Devil summons them via the Tiger Imp ambush and they do not eat any faster than a regular imp despite the animation suggesting otherwise.

They are also vulnerable to the following regardless if they have their jetpacks:

Blover and Hurrikale can also be used to kill them instantly, although Blover is a better plant to use due to being able to target the whole screen and costing less than Hurrikale.

Of course, if you do not have any of the plants above (or is currently missing Plant Food), you can simply swipe away their jetpacks. Be warned, as they will move across the lawn even faster, so be sure to either be ready to kill them fast, have ice plants or stunning plants to slow them down, or have defensive plants to stall them. 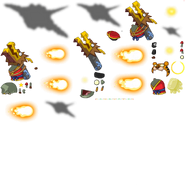 HD Tiger Imp on the ground 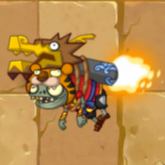 Tiger Imp on the ground 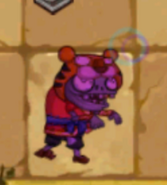 Hypnotized Tiger Imp
Add a photo to this gallery

Retrieved from "https://plantsvszombies.fandom.com/wiki/Tiger_Imp?oldid=2377873"
Community content is available under CC-BY-SA unless otherwise noted.