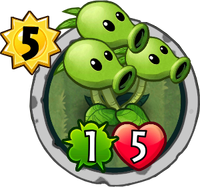 Attacks here and next door.
"My favorite number is 5."
Threepeater is a basic common plant card in Plants vs. Zombies Heroes, and a member of the

. It does not have any traits, and its ability allows it to attack on the lane it is on and the lanes adjacent to it per attack, similar to the Splash Damage trait. However, unlike Splash Damage, Threepeater's adjacent shots do damage to the zombie hero and is equal to Threepeater's strength instead of being fixed

Its description is a reference to its Suburban Almanac entry from Plants vs. Zombies, as the last sentence says that the Threepeater's favorite number is five. Its cost and health also allude to this.

Unlike other plants with Splash Damage, Threepeater can actually hit your opponent and/or zombies in three lanes at the same time. This basically multiplies Threepeater's strength by 3, as well as any further strength boosts. For example, if Threepeater is behind Torchwood, it will do up to 9 damage to your opponent rather than just 3. This makes Green Shadow and Nightcap the heroes that synergize best with Threepeater, as they are the only Smarty heroes with strength-boosting cards like Berry Angry or Onion Rings. Citron and Beta-Carrotina can also use Pecanolith for devastating effect.

Against zombie fighters, Threepeater's ability works just like the Splash Damage trait, but since it attacks with the same strength on each lane and can hit your opponent too, it is a potentially stronger version of Splash Damage.

This plant also pairs well with certain environments. Some examples are Planet of the Grapes, which can give you three extra cards per turn, and Coffee Grounds, which gives Threepeater the

When you are facing this plant, you can take advantage of its low strength and immediately destroy it using Rolling Stone. While it is difficult to destroy due to its health, it should not be much of a threat if Citron, Rose, or Beta-Carrotina plays this since they lack strength-boosting plants or tricks (with the exception of Pecanolith) - you may treat this as a tankier Lightning Reed that can still damage you if there are no zombies in the lanes next to it.

If it gets out of hand, either Bounce it with Backyard Bounce or Pogo Bouncer, or destroy it with tricks like Rocket Science. Do not let Threepeater's strength go too high or leave the lanes undefended, as doing so may allow it to defeat your hero in just a few hits.

Retrieved from "https://plantsvszombies.fandom.com/wiki/Threepeater_(PvZH)?oldid=2360560"
Community content is available under CC-BY-SA unless otherwise noted.