When a Plant is played, that Plant's

.
They say two heads are better than one. Three-Nut just took the next evolutionary step.
Three-Nut is a colossal super-rare plant card in Plants vs. Zombies Heroes and a member of the

. It does not have any traits, and its ability sets the strength of every plant to 3 when one is played. This ability persists until all Three-Nuts are removed from the field.

It is based on a regular Pea-Nut, but with an additional head, hence Three-Nut's name. It may also be based on the case of real life peanuts rarely having three or more nuts instead of the usual two.

Its name is a portmanteau of "three," referring to its heads, strength, and ability, and "Pea-Nut," the Plants vs. Zombies 2 plant it is based on. Its name also sounds, and is spelled similar to "tree nut," which are nuts that grow from trees.

They say two heads are better than one. Three-Nut just took the next evolutionary step.

Three-Nut is a very powerful card in the right deck, especially decks that mostly consist of low-cost, low-strength, high-health plants. Nut decks are a good example, as Three-Nut benefits from nut synergy. It also works incredibly well with cheap fodder which high health and low damage.

While its low health may seem like a weakness, it can be easily mitigated. The most common mitigations are by combining this with a Wall-Nut or Garlic on turn 4, or by playing this on turn 3 only when the Zombie player commits all their brains before you play.

Three-Nut's ability is insanely oppressive. The best way to use this card is by combining it with low-cost, low-strength, high health plants such as Garlic and Wall-Nut. Garlic and Wall-Nut can be combined with Three-Nut to become 3/5s and 3/6s with Team-Up respectively. Combining Bullseye cards such as Galacta-Cactus, Tricarrotops, and Jugger-Nut also works well, with Tricarrotops continuing to gain stats. Hot Date and Primal Potato Mine also become better, dealing 6 damage rather than 3. Because of these synergies, you can run this in the same deck as Pecanolith, as both synergize with the same cards, as well as Three-Nut making Pecanolith resistant to Hearty's Rolling Stone and Weed Spray. It can also save your plants from Doom-Shroom (PvZH) or Rocket Science as they will have 3 attack instead of 4 or more. But it can make them weaker.

Contrary to popular belief, Three-Nut does not limit the options you can put in your deck, as the correct way to use this card is to build around it. You can also put this in a deck with other build-arounds that synergize with the same cards. Most notably Pecanolith, which has been explained above, and Onion Rings, which provides more strength at the cost of coming out slower. Putting two build-arounds that synergize with the same cards in one deck increases your chance of drawing one of your build-arounds and taking control of the board.

Three-Nut can become a dangerous card if not dealt with right away. Due to its measly health stat of 2, taking it out is not a difficult task, but it can easily be protected with a Team-Up plant. The

Crazy class is best at taking it out, due to having access to Bungee Plumber, Exploding Fruitcake, and Electrobolt and its signature counterparts Stayin' Alive and Missile Madness, though you still have to deal with another card if it was combo-d on the same turn.

An evolved Chum Champion is a weaker link to counter Three-Nut, as it will wipe the board of the Three-Nut as well as every single plant affected by it. However, it answers Three-Nut and its band of threats from last turn after they all got value in the Fight Phase, which is really more significant than one might think, and also there are also better options of countering it to boot.

While its ability is troublesome for Rolling Stone, Weed Spray, or Rocket Science users, Knockout should be able to destroy a few plants affected by it. Clearing out the entire board effectively, though, is very hard and unrealistic to do. 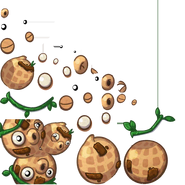 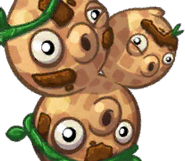 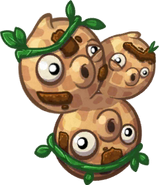 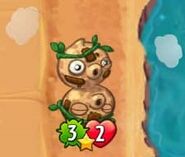 Three-Nut attacking from the opponent's point of view

Alien Ooze being played on Three-Nut