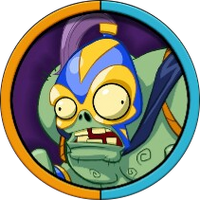 The Smash is a zombie hero in Plants vs. Zombies Heroes and the leader of the

Beastly classes. His signature superpower is Slammin' Smackdown, which instantly destroys a selected plant with 4

He is the hero version of Gargantuar.

The Smash's design may be based on the stereotypical Hispanic wrestler, sometimes known as luchadores. This is supported with some references to wrestling, primarily in his missions.

His name may be a reference to a Gargantuar's primary method of attacking, which is smashing plants with the large weapon it holds, or rather, in this case, his huge fists.

The Smash defends early, then builds up brains for enormous Zombies that are almost as big as he is!

The Smash is mostly known for using Gargantuar zombies, which means his goal for the win is to be on the defensive at the start, only after which he may turn aggressive as the game progresses. It is best to load up on some tough early-game zombies like Arm Wrestler, Sumo Wrestler, or Conehead. The Smash's combination of the Hearty and Beastly classes also has some synergies. For example, he can boost

Armored zombies with Loudmouth and stat-boosting tricks such as Vitamin Z, turning them into ironclad tanks. He can also increase the survivability of

Frenzy zombies such as Vimpire by playing health-boosting tricks like Camel Crossing or Going Viral.

Since The Smash has access to quite many Gargantuar zombies (with the Beastly class having the most), you can create strategies making use of Gargantuars. One such strategy is using Smashing Gargantuar to give all Gargantuars on the field

Frenzy, allowing them to do direct damage to the plant hero should they manage to destroy a plant. Gargologist can reduce the cost of Gargantuars, allowing a Smashing Gargantuar to be played on the third turn. Due to the number of Gargantuar zombies he can use, Gargologist becomes an essential part of most decks you use with him. Cards such as Nurse Gargantuar and even Zombot 1000 can be played early while Gargologist is in play.

The Smash can also opt to use a deadly pet deck. Cat Lady gets more strength for each pet card played in one turn, while Zookeeper boosts the strength of all pet zombies whenever a pet card is played. Camel Crossing is also part of the pet tribe, allowing you to boost the health of all your pet zombies and activate the abilities of Cat Lady and Zookeeper. Combining these two cards with other pets will do massive damage to your opponent or even finish them off before they have a good chance to play cards that can stop them. Alternatively, you can create a sports deck with a few heavy hitters in case of late game, with Energy Drink Zombie, Synchronized Swimmer, and Surfer Zombie being sports zombies that come from the Beastly class that only The Smash can use with his sports synergy decks.

Deck types aside, The Smash has access to several good early-game cards. Arm Wrestler and Dog Walker have decent stats for their cost and can put the pressure on many plants. Sumo Wrestler and Terrify can move plants into favorable spots (for The Smash) while foiling your opponent's strategy. And finally, Galvanize and Possessed are efficient boosting cards that can save essential early-game zombies.

The Smash also has the most healing cards of any zombie hero, so use it to your advantage to keep you alive long enough to bring in your Gargantuars and other tough late-game zombies. Examples are Medic, Nibble, and Nurse Gargantuar. He also has many instant-kill tricks that can dispose of potential threats, including Locust Swarm, and most importantly, his signature superpower, Slammin' Smackdown. This signature superpower can be combined with Supernova Gargantuar to clear hordes of plants during the Zombie Tricks phase, as it is a Gargantuar trick. The same can be done with King of the Grill. Rolling Stone and Weed Spray may come in handy when the opponent decides to play low-strength plants.

The Smash's only major weakness is his low card draw, as he has very few reliable ways to draw cards. The only reliable source of cards is Interstellar Bounty Hunter, although some other cards like Terrify and Going Viral can draw cards too. However, this may not be the case if a Gargantuar deck is used, particularly because Gargantuar zombies already have a high brain cost.

Take caution of his Gargantuars as they can spell doom as the game progresses. This will only get more dangerous if The Smash plays a Gargologist, which allows him to get them on the field earlier. When this happens, your chances of winning will quickly decrease. Unless you are using a high sun-cost deck, it is recommended to use Squash or Lawnmower to take down his Gargantuars, though only Solar heroes may use either of these. If you are playing as a Kabloom hero, damaging tricks such as Sizzle also work albeit to a lesser extent. Apart from destroying the Gargantuars, you should also destroy any Gargologists as quickly as you can.

Guardian heroes can deal with The Smash's Gargantuars effectively, as they have access to Doom-Shroom, which can easily clear the field of Gargantuars, but also destroy high-strength plants, and Shamrocket, which offers a safer option, but can only destroy one Gargantuar. They can also use Grave Buster to prevent dangerous Gravestone zombies from emerging, like Sumo Wrestler, Loudmouth, and particularly, Rodeo Gargantuar. However, since Guardian plants tend to have low strength, be wary of Rolling Stone or Weed Spray.

This is The Smash's pet deck. If you cannot get rid of all his pet zombies quickly, Zookeeper and Cat Lady will become so strong, they can basically defeat you in one turn. Fortunately, both are fragile, meaning if you can destroy his pet zombies before the Zombie Tricks phase, you will basically win from there, since Camel Crossing will not be very effective. Use Solar Flare as she has access to cheap damaging tricks such as Berry Blast and efficient hard removals such as Squash.

All You Can Eat

This Smash deck is all about zombies that benefit from plants being played on their lanes. If you fail to realize that, they will become too strong for you to survive their attacks. However, if you do, you can basically play instant-kill cards to remove them before they have a chance to get boosted. Once again, Solar Flare is the best hero against this deck for the aforementioned reasons.

This is The Smash's Gargantuar deck. If you cannot defeat The Smash in the early rounds, then his Gargantuars will most likely seal your defeat unless you have effective ways to remove them with expensive cards. Use Wall-Knight or Solar Flare, as Wall-Knight has Doom-Shroom to wipe clean Gargantuars at a cheap cost, while Solar Flare has cheap removal tricks to get rid of any early-game threats. Remember that The Smash requires a good early start to win with this deck.

This deck relies on Secret Agent to Bounce The Smash's strong zombies, especially Intergalactic Warlord and Zombot Battlecruiser 5000, not to mention Coffee Zombie as well. As such, it is best to remove these zombies immediately before they can be Bounced and replayed. Spudow is one of the best heroes against this deck, as a Berry Blast or two will take care of the threats like Intergalactic Warlord and Coffee Zombie, while Zombot Battlecruiser 5000 can be taken care of with Grave Buster.

This deck is all about the

Frenzy zombies. With strong zombies such as Supernova Gargantuar and Octo Zombie and Ancient Vimpire as the core of the deck, ensuring that The Smash's zombies get a boost for each plant they destroy. Black Hole and Sumo Wrestler ensures your fragile plants end up as boost fodders while Interstellar Bounty Hunter, Cheese Cutter, and King of the Grill keeps his hand topped up with cards. Fortunately, that means this deck is vulnerable to tricks, especially Instant-kill cards such as Squash and Shamrocket, as the deck requires you to play plants to win the match. Bouncing the zombies also work, as their boost would be wasted.

Using Rose however would be the best counter to this deck, as she has easy access to transformation tricks in Goatify and Transmogrify, making the dangerous zombies easily removed. She also has access to bouncing cards such as Jumping Bean and Cob Cannon to ruin any set-up attempts.