.
It may seem an inhospitable place for Plants, but with a little TLC and some patience, it'll grow more than just potatoes. Much more.
The Red Plant-It is a galactic super-rare plant environment card in Plants vs. Zombies Heroes and a member of the

to play, and its ability gives all plants in it +5

. This ability persists until The Red Plant-It is removed from the field.

Its overall design and description reference the experiment done by NASA plant researchers in which potatoes were shown to be able to grow on Mars, which is also called "the Red Planet."

The term "TLC" mentioned in its description is an acronym for "tender loving care," which is "to be treated in a kind and caring way."

It may seem an inhospitable place for Plants, but with a little TLC and some patience, it'll grow more than just potatoes. Much more.

This is a powerful environment that gives all plants in that environment a huge stat boost, allowing even the weakest plants to wreak serious havoc and last a few turns. And because it is an environment, it will be able to affect many plants over time, until removed. Due to this, using plants with Team-Up is recommended, as you can increase the damage output heavily on that lane. Grass Knuckles does this the best. Captain Combustible can play Invasive Species here, turning it into a monstrous 10/9 for 3 sun.

However, this environment can be played before or after a plant is played in it, which can be useful if you had played a powerful plant on board. This combo can work effectively with plants that have the

Double Strike trait like Bananasaurus Rex to do lots of damage each combat. However, be aware of most instant-kill cards, especially from the

There is also a special technique using Grape Power or Grape Responsibility to massively boost plants played here since even when this environment is replaced by another one, the plant will still keep the boost.

This environment is extremely dangerous, as its gargantuan boost persists even if it is overridden, and you must counter it immediately. Playing one of your own cheap environments is a valid solution, and Excavator Zombie works too, as he will bounce both it and the plants inside, forcing your opponent's costly replay. Rocket Science, Primordial Cheese Shover and Locust Swarm can also destroy said plant easily. useful for weakening and possibly destroying the plants in this environment. If all else fails, resort to using

Deadly zombies or Bouncing plants on that environment, or block the lane with a weak zombie. Just take note that

Mega-Grow heroes may use bonus attacks or

Double Strike plants to thwart your plans, not to mention the dangers from other classes.

The Red Plant-It's grayed out card 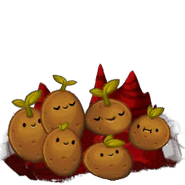 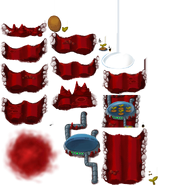 The Red Plant-It on the field