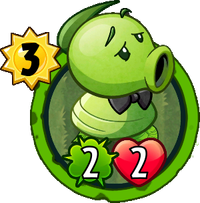 When you play a Pea, that Pea gets +2

.
"It ain't easy keeping the peas in this family."
The Podfather is a premium rare plant card in Plants vs. Zombies Heroes and a member of the

. He does not have any traits, and his ability gives all pea plants played after it +2

. This ability stacks with each Podfather on the field and persists until all Podfathers are removed from the field.

In all battles of the mission Beware the Bewitching Zombie, the plant hero starts with a Podfather on the second lane with a Wall-Nut in front of him.

His name, appearance, and former description are all references to the 1972 movie The Godfather.

His name is a portmanteau of "pod," referring to him being a pea plant, and "Godfather," the character he is based on.

"It ain't easy keeping the peas in this family."

The Podfather isn't very great in combat, but his ability makes him a big threat. Every pea plant will gain a stat boost upon being played while The Podfather is on the field. Even the weak Peashooter can become a decent plant if boosted by The Podfather, let alone the more powerful ones like Repeater, Skyshooter, and Threepeater. Using Torchwood is also a good choice since it powers them up even further. Overall, he is a good plant for boosting other pea plants, and should be protected well.

Since The Podfather is part of the Mega-Grow class, you can increase his survivability with strength and health boosts like Fertilize or Plant Food. And as The Podfather himself is a pea plant, you can have his strength boosted with a Torchwood in front of it.

While The Podfather isn't so threatening by himself, your opponent can wreak havoc by playing many pea plants after him, making all of them stronger and more dangerous, especially if played behind a Torchwood. Dispose of The Podfather before your opponent can fill the field with pea plants. Thanks to his low stats, Rolling Stone and Bungee Plumber can destroy this easily unless The Podfather's stats have been boosted.