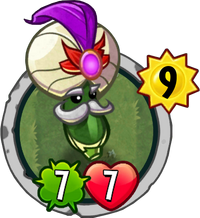 When played: Transform all Zombies into 1

Zombies with no abilities.
"Presto change-o! Now you see a powerful Zombie. Now you don't!"
The Great Zucchini is a premium legendary plant card in Plants vs. Zombies Heroes and a member of the

. It has the Amphibious trait, and its ability transforms every zombie on the field, excluding those hiding in gravestones, into one of the 5 basic zombies (Cardboard Robot Zombie, Imp, Backup Dancer, Skunk Punk, Baseball Zombie) at random when it is played.

It is based on a zucchini (Cucurbita pepo var. cylindrica), also known as a courgette, a summer squash fruit in the genus Cucurbita that is commonly mistaken for a vegetable. It could also be based on The Sultan, a character in Disney's animated film, Aladdin.

Its name is a portmanteau of "The Great Houdini," who was a famous magician whose actual name was Harry Houdini; and "zucchini," the real-life plant it is based on. It could also be a reference to the professional children's entertainer with the same name.

Its description is based on the famous phrase, "Now you see me. Now you don't!" It is also a phrase a magician would use, hence its name being based on Harry Houdini. Its description also alludes to its ability.

The Great Zucchini is very expensive, but boasts great raw stats, the Amphibious trait, and most importantly, a formidable ability. Statwise, it can defend lanes well, especially on the aquatic lane.

As far as its ability goes, the more threats your opponent has on the field, the better, as it can transform all of them into near-harmless 1

zombies. Although this costs the same as Zombot 1000, The Great Zucchini can nullify "When destroyed" abilities of zombies like Portal Technician's and Octo Zombie's.

However, just because the threats have been weakened heavily doesn't mean you are safe, as your opponent can still play more threatening zombies the next turn if the 1

zombies are destroyed. Also, since the zombies can still do damage, do not overlook them if you have low health, as they possibly could defeat you. They can also fill up your block meters for low damage, but this also means you could lose all your Super Blocks too early in the game, making you unable to block more powerful attacks. If your opponent is a

Brainy hero, they could play Bad Moon Rising, rendering this plant's ability useless, or even counterproductive, so keep that in mind.

If it is played in an aquatic lane against opponents without Amphibious zombies like Rustbolt, Z-Mech, and Professor Brainstorm, it can easily end the game in your favor as you can do 7 damage very easily to them. You can play Sour Grapes after The Great Zucchini to completely wipe the field, making all your plants able to directly attack your opponent. However, this strategy is primarily only possible as Nightcap, and requires at least 13

if he wishes to do so in one turn. Citron and Beta-Carrotina can use this in conjunction with

Armored plants, which can nullify the zombies' strength stat of 1.

You can also use Rescue Radish to Bounce it so that you can replay it again. Doing it in the same turn demands 12 sun and thus is only viable in later rounds, so if you are confident that the opponent lacks any removal tricks, you can proceed to Bounce him the next turn.

The Great Zucchini is a strong plant statwise, but its ability is even more dangerous, as it transforms all your zombies into weak 1

zombies. Since plants play their fighters after zombies do, your opponent can play The Great Zucchini without any way of you predicting it, making mind-games a necessity until you find out your opponent does not have it in their deck. It is recommended to not play all your most powerful zombies at once, as you can end up devastated by The Great Zucchini's ability. Do not Bounce this unless if you are going to win or if all your zombies are weak anyway, as your opponent can replay it later on.

Using Teleport or Teleportation Zombie is another counter, as you can play your zombies after The Great Zucchini has been played, keeping them safe from its ability. However, Teleportation Zombie can only be used if you plan to play your zombies on the same turn he is played, or if you use Mixed-Up Gravedigger to hide him in a gravestone, primarily as Super Brainz or Huge-Gigantacus. Mixed-Up Gravedigger can also be played after you play your zombies, which also protects them from The Great Zucchini's ability. However, there are counters to this strategy, such as Cool Bean being played after Winter Squash, or Grave Buster in the case of Citron and Beta-Carrotina, so take caution in playing Mixed-Up Gravedigger.

The best counter for its ability, however, is Bad Moon Rising, as it will transform all your 1

zombies into very powerful threats. Another way is to use cards that synergize with the 1

cards, but this is unreliable.

The Great Zucchini itself is the less dangerous part, but a 7

plant is still no joke, especially since all your zombies have transformed into 1

weaklings. You could heavily boost a zombie with boosting cards like Maniacal Laugh, but this isn't the most effective strategy if you want to take down a single plant. Instead, playing tricks (and environments) is the more cost-effective option; instant-kill cards like Rocket Science, Cut Down to Size, and Locust Swarm, cards that grant the

Deadly trait like Barrel of Barrels and Super Stench (as well as Laser Base Alpha if The Great Zucchini is on a ground lane), and Exploding Fruitcake are your best choices. If you are playing as Immorticia, you can use the Teleport/Teleportation Zombie + Zombot 1000 combo to destroy all of your opponent's plants, including The Great Zucchini, and land 9 damage on your opponent. However, you will usually have to wait a turn for this.

Retrieved from "https://plantsvszombies.fandom.com/wiki/The_Great_Zucchini?oldid=2358163"
Community content is available under CC-BY-SA unless otherwise noted.