Do 2 damage to each Plant.
So. Many. Feathers.
The Chickening is a premium rare zombie trick card in Plants vs. Zombies Heroes and a member of the

to play, and its ability does 2 damage to all plants on the field.

This trick is based on the Zombie Chicken from PvZ2 and PvZH. Its name may be a reference to the 2008 horror movie "The Happening," a horror film about plants attacking humanity by spraying a deadly mist.

It may also possibly be a reference to dialogue in a Wild West level (Locked and Loaded III) in Plants vs. Zombies 2 before version 1.7. In the dialogue, Penny says that the day the level took place on will be remembered as "The Great Chickening of 1850."

One of the few board-wipe tools available for the zombie side alongside Weed Spray and Acid Rain, The Chickening is designed to fight aggro decks and their high strength, low health fighters. As the game progresses and the plants' overall health increases, The Chickening can continue to function as a powerful, but rather expensive trick to weaken plants in conjunction with Bungee Plumber and Zombot's Wrath. This trick can turn the tables, possibly wiping out all the plants on the field.

Use it like you would use Sour Grapes, but as a trick and the fact it deals more damage. You could also use this to defeat plants in the way of your

Anti-Hero zombies so they can land direct hits on the opposing hero. If you combine this with the Zombot Sharktronic Sub, you can wipe out all plants at once, excluding those Shielded by Peel Shield, Root Wall. or Force Field. Note that this option is Impfinity exclusive.

Another option is to simply use this to defend yourself from plants with high strength but low health, but you could also save it for a later use. Playing this trick can also boost pet zombies like Cat Lady and Zookeeper since it is a pet card, which can benefit them well, though only Electric Boogaloo can do this normally. However, it's quite devastating against most Kabloom plants, because they have extremely low health and a big boost to the pets can quickly change the game.

Avoid using it on plants with the "When hurt" abilities like Hibernating Beary or Mirror-Nut unless it can destroy them. It will activate their abilities and do more harm than help. Especially with Mirror-Nut, do not use it when there are a lot of nuts on the screen or it will deal damage constantly to the zombie hero. The only exception is if you are about to get a Super-Block or, as Z-Mech, somehow got a shielded Planetrary Gladiator.

Also, be very careful if Transfiguration is on the field, as while you can shut it down, it will transform everything survives it into ramdom plants.

Kabloom heroes should be wary of this trick, as this can wipe out their entire lineup. Increasing health with Grow-Shroom, Storm Front, Steel Magnolia and Bubble Up is a good way to reduce the potential destruction that this causes. It is best to pay attention when Crazy heroes save 4 or more brains, possibly hinting that the player should start protecting their plants.

You can also discourage your opponent from playing it by having Black-Eyed Pea, Sportacus, Transfiguration, Pear Cub, Hibernating Beary, Mirror-Nut, Galacta-Cactus and Punish-Shroom on the field, or prevent your opponent from using it by playing Forget-Me-Nuts, Dark Matter Dragonfruit and Brainana. 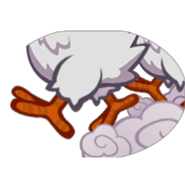 The Chickening being played

The Chickening's statistics before update 1.14.13

The Chickening's statistics before update 1.2.11

HD The Chickening before update 1.2.11 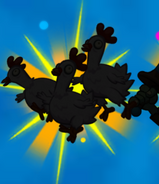 The player receiving The Chickening from a Basic Pack