Conjure an Environment. All cards in your hand cost 1

less.
This is Huge-Gigantacus' greatest invention ever. It's also his only invention. But it's best not to point that out to him.
Terror-Former 10,000 is Huge-Gigantacus' premium legendary zombie signature superpower trick card in Plants vs. Zombies Heroes and a member of the

to play, and its ability Conjures an environment card and reduces the cost of all cards in the zombie hero's hand by 1

, including the Conjured environment.

Its name is a portmanteau of the word "terraform," a hypothetical process that occurs on planets and moons that modifies its atmosphere, temperature, surface topography or ecology, referring to how this superpower Conjures an environment, and the word "terror," meaning to feel fearful, referring to the fact that Huge-Gigantacus is a zombie.

This is Huge-Gigantacus' greatest invention ever. It's also his only invention. But it's best not to point that out to him.

This superpower is a really helpful one. The main benefit is that it Conjures a random environment from the entire game. While you may get weak environments, you may also get powerful ones like Laser Base Alpha or Transformation Station. The Conjured environment also becomes cheaper, which is an added benefit.

As for the second benefit, all the cards in your hand now cost 1

less, including the Conjured environment, allowing you to play your cards earlier than normal. If you get this during the mulligan and play it on turn 1, you may have an early advantage if the cards you get are good. However, take note that any cards you draw after playing this superpower will not be cheaper. As such, it may be better to play this card later in the game when you have more cards, in order to get more value out of this superpower.

This superpower is better with Dr. Spacetime, as the Conjured environment will be even cheaper due to his ability stacking.

Since it is a science trick, you can use it as a cheap way to activate Interdimensional Zombie's ability.

For easy reference, here is a list of all non-superpower zombie environments:

Since this superpower doesn't harm you nor benefit your opponent's zombies, you can't really counter it, but you can prevent your opponent from playing it. In the early to mid-game, play plants with high strength to force your opponent to use their cards. This can lower the number of cards that benefit from Terror-Former 10,000. 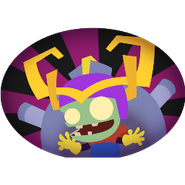