Move a Plant.
Draw a card.
Just a disembodied Zombie head screaming uncontrollably. Nope. Nothing terrifying about that.
Terrify is a premium uncommon zombie trick card in Plants vs. Zombies Heroes and a member of the

to play, and its ability moves a selected plant onto a selected lane and draws a card. Its closest plant counterpart is Banana Peel.

Its name is based on the real meaning of terrify, which means to cause someone to feel extreme fear. Its head is based off Telepathy, albeit with no hands.

Just a disembodied Zombie head screaming uncontrollably. Nope. Nothing terrifying about that.

This trick is exactly the same as Sumo Wrestler's ability, and all strategies that apply to it can be used here; Terrify can be played to move a plant onto another lane to clear the lane for a heavy-hitting zombie (especially Amphibious and Team-Up plants) or onto a lane with a zombie so the plant can be destroyed. An alternate strategy is to move a plant towards Arm Wrestler in order to boost his stats by +1

Since Terrify also draws a card, it works well with Dino-Roar cards. The strongest example can be executed as The Smash, who can move a plant onto Mondo Bronto's lane to instantly destroy it.

Be careful against [[File:|20px|link=]] heroes, as they can play it to move a plant to either let it be destroyed by a powerful zombie on another lane, or move it out of the way to ensure heavy damage to you. The best way to avoid this situation is to have two equally strong plants on a lane, as this trick can only move one plant.

Also, you need to be careful if your opponent starts putting out Dino-Roar zombies on the field, as they might make use of the card draw of Terrify to activate their abilities. 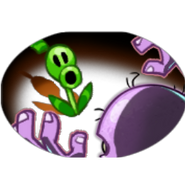 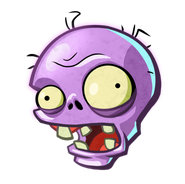 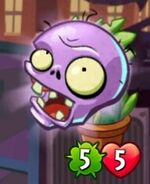 Terrify being the featured card in the menu for the July 12th, 2017 Daily Challenge

The player obtaining Terrify from a Basic Pack 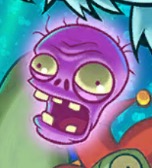 Terrify on the title screen