5 min.
More health. Same amount wild.
Terracotta Wildflower is a plant in Plants vs. Zombies: Battle for Neighborville. It is a Spawnable Weed, which can only be summoned in Herbal Assault.

Terracotta Wildflowers are the plant equivalent of the TV Buckethead, it deals ranged damage to zombies and has more health than the standard Wildflower.

Terracotta Wildflower, like the standard Wildflower, gets its name from Wildflowers, flowers that grow in the wild whose seeds were not intentionally planted.

Since "Wildflower" does not refer to a single flower, it is hard to tell which specific flower Wildflower is based on. However, it does closely resemble the Tussilago farfara, also known as the Coltsfoot wildflower.

The Terracotta Wildflower also wears a terracotta pot, a type of pot commonly used for planting. 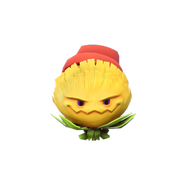