More than just a fashionable accessory, the terracotta represents the strongest in Weed headwear.

2 min.
More than just a fashionable accessory, the terracotta represents the strongest in Weed headwear.
Terracotta Weed (also sometimes named Potted Weed and Flower Pot Weed) is a Spawnable Weed in Plants vs. Zombies: Garden Warfare 2 and Plants vs. Zombies: Battle for Neighborville. ​It is the strongest headwear Weed counterpart, being more powerful than a Pumpkin Weed. It is the plant counterpart of the Buckethead Zombie. It wears an upside-down Flower Pot (made of terracotta) as a helmet, hence its name.

It has a festive counterpart named "Feastivus Weed", that wears a broken Christmas bauble ornament as a helmet in place of a flower pot. The bauble gives it a minor health boost compared to the default Terracotta Weed.

​More than just a fashionable accessory, the terracotta represents the strongest in Weed headwear.

This clever disguise has absolutely no effect on Zombies, but it does provide extra armor!

​More than just a fashionable accessory, the terracotta represents the strongest in Weed headwear.

And for the Feastivus Weed:

In other modes, spawned Terracotta Weeds will always have a set health of 170 HP, with the Feastivus Weed having 175 HP.

The Terracotta Weeds' primary weapon is called Weed Whip, it is a short range attack that deals 15 damage at a slow pace. Terracotta Weeds will prefer to use their melee attacks, moving in closer to the target to attack them directly.

Seed Spit: A long ranged attack which deals 15 damage. Terracotta Weeds will only use Seed Spit when their target is first sighted a long distance away, before moving closer towards the target to attack using their short ranged primary attack. 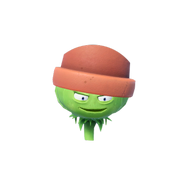 Its icon in Battle for Neighborville