Not to be confused with Tennis Star, an All-Star variant in Plants vs. Zombies: Garden Warfare 2.

When played: This gets +3

She does not have any traits, and her ability gives her +3

for the turn she is played. Her closest plant counterpart is Bonk Choy.

She is based on a tennis player, a person who plays tennis, a racket sport that can be played individually against a single opponent or between two teams of two players each.

Her ability may be a reference to serves being usually more powerful than normal swings in tennis.

Her description can be translated to "When it's Plants vs. Zombies, the score is never 0-0," as the word "love" is used when 0 points have been won in tennis.

When it's Plants vs. Zombies, the score is never love-love.

With her low cost of brains and her strength-boosting ability, this card serves as a cheap glass cannon that is able to dish out heavy damage to just about anything during all parts of the game.

However, since her strength boost only lasts for a turn, Tennis Champ will be useless after that if she manages to survive. You can try to boost her as Electric Boogaloo via Vitamin Z or Loudmouth, or as Z-Mech via Team Mascot (due to her being a sports zombie), although there will be better zombies to use by then.

Therefore, if possible, try to strengthen her as much as you can on the same turn, as Tennis Champ will only be viable than turn only. If you really want her to be useful afterwards, either Bounce her with Firefighter or Secret Agent, put her in a gravestone with Mixed-Up Gravedigger or In-Crypted, or use her for Evolution.

Professor Brainstorm can sneak Tennis Champ into play with Teleport or Teleportation Zombie so that Tennis Champ does not have to survive through a potential round of damaging tricks and abilities, with an added element of surprise for his opponent. Furthermore, you do not need to save up more than two brains for the Teleport combo, or 3 brains for the Teleportation Zombie combo (although the latter is better if you want to sneak in multiple Tennis Champs).

As Impfinity, when you first play this zombie starting from turn 2, you can use Smoke Bomb and move her into an empty lane (or a lane with a powerful plant in it), allowing her to hit slightly harder, as well as granting you the choice of where to strike. However, Mini-Ninja would be a better option if you want more damage done to your opponent long-term.

Tennis Champ is a formidable zombie in terms of strength, and while she becomes harmless after the turn she is played, it is best to prevent her from doing damage when her strength boost is still present, either by destroying or stalling her.

If you want to stall her for the turn she is played, the two options are

Freezing and shielding. Both options prevent Tennis Champ from doing damage, allowing the plant in front of it to destroy her with ease (if any). However, stalling is only viable for heroes in the

Guardian class (or both), making it limited. Also, if you shut down Tennis Champ for a turn and let it survive, your opponent could reboost it, and the boost will not be reverted this time.

Another option is to destroy her before she gets to attack (either during the Fight! phase or via bonus attack cards), which should be easy due to her low base health of 1. The most effective option at destroying single Tennis Champs is by playing tricks, examples being damaging cards, stat-degrading cards, bonus attack cards, and superpowers, although superpowers may be better preserved for another zombie.

If you need to remove swarms of Tennis Champs, or if your opponent is trying to suppress your use of tricks, you can play Splash Damage plants such as Lightning Reed or Snapdragon, or Sour Grapes.

If neither option is available, or you just want to take the hit, Grape Responsibility can be played to let a plant take a hit from her more reliably. However, this is only possible starting from turns 2 and on. 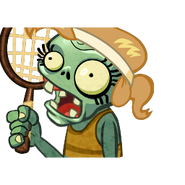 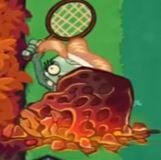 Gigantic Tennis Champ due to a glitch

Tennis Champ tinted gray due to a glitch

Tennis Champ with the