Not to be confused with Teleport or Teleportation Zombie.

In Gardens & Graveyards, teleporters spawn in one of two possible build spots (two for each garden) and will remain there until the garden is captured (Garden Warfare only). In Garden Ops, a teleporter may spawn in a random location at the start of a wave or during a wave, after which it will generate an endless amount of zombies until it is destroyed. When a teleporter spawns, it will appear on the HUD display.

Teleporters will always have Zombot Turrets (buildable in Gardens & Graveyards and automatically spawned in Garden Ops) placed in strategic locations around them.

A functional teleporter (with a health bar visible to Engineers)

A live teleporter entrance
Add a photo to this gallery 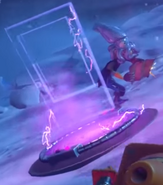 Retrieved from "https://plantsvszombies.fandom.com/wiki/Teleporter?oldid=2123489"
Community content is available under CC-BY-SA unless otherwise noted.