Start of turn: If there's a Zombie here, gain a Teleport.
Teleportation is a relatively new technology. Has a few kinks that need ironing out. So yeah, sometimes things get a little...mixed up.
Teleportation Station is a super-rare zombie superpower environment card in Plants vs. Zombies Heroes, and a member of the

to play, and its ability gives the zombie hero a Teleport card at the start of each turn, as long as there is a zombie on it. This persists until another environment overrides it.

Teleportation is a relatively new technology. Has a few kinks that need ironing out. So yeah, sometimes things get a little...mixed up.

This environment can be quite useful if used correctly. As long as there is a zombie alive in this environment at the end of each turn, you will get a free Teleport card into your hand. This can allow you to play a zombie during the trick phase to avoid plant threats as well as drawing free cards if you play Teleport cards.

But you must remember to have a zombie in this environment or otherwise, it won't give you a Teleport card. It is recommended to use high health zombies like Dr. Spacetime, Teleportation Zombie, or Wormhole Gatekeeper in that environment to keep drawing more Teleports. If you run Neutron Imp, this environment does allow him to do a bonus attack if you play Neutron Imp first and then this environment, clearing weak plants out of the way. If you seek that the plant hero may play a powerful card to destroy that zombie, use Beam Me Up or teleport in one zombie to ensure a zombie in that environment as long as the zombie survives in the combat. Another strategy is to use cards that cannot be hurt that turn, such as Zombot Battlecruiser 5000 or Zombie Coach. However, this is only possible with Conjuring since Huge-Gigantacus does not have the Hearty class.

Keep in mind that if you keep following this strategy longer, you will have too many cards in your hand, causing your block meter to not activate so be aware.

Since this is a science card, it can activate Interdimensional Zombie's ability.

While not a threatening environment to plants, this can help the zombie hero a lot as it has the ability to play a zombie during the tricks phase and drawing a free card. This is really dangerous in the late game as they can play as many zombies while being unharmed to plant threats and drawing more cards than usual.

The best way to stop it is to destroy a zombie in that environment to prevent the ability from activating using cards like Guacodile or Spring Bean or overriding the environment with one of yours. 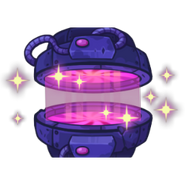 A gigantic Teleportation Station due to a glitch