Plants and Zombies face off in a competition to be the first to vanquish 50 opponents.

Vanquish your opponents to win the fight.

Compete in an 8v8 PvP battle to Vanquish your opponents and be the first to reach 50 vanquishes for the win.

Team Vanquish is based upon the aspect of two teams battling out to control the battlefield. Teamwork is practically required in this game mode. Considering how it is easy to get vanquished while alone, the player should avoid straying too far from a group, especially one with a healer. Some classes are more ideal for being alone than others, such as the Chomper, but they are easier to vanquish by the enemy team. 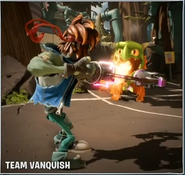 the old Team Vanquish logo, before more game modes were released
Add a photo to this gallery

Retrieved from "https://plantsvszombies.fandom.com/wiki/Team_Vanquish?oldid=2354800"
Community content is available under CC-BY-SA unless otherwise noted.