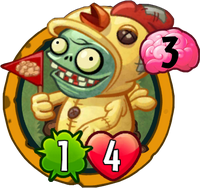 Start of turn: All Sports Zombies get +1

.
Say what you will about the costume - Zombie morale has never been better.

Team Mascot is a basic common zombie card in Plants vs. Zombies Heroes, and a member of the

. He does not have any traits, and his ability gives all sports zombies on the field, including him, +1

at the start of every turn, starting from the next turn after he is played. This ability stacks with each Team Mascot on the field, and persists until all Team Mascots are removed from the field.

He is based on a mascot, a person, animal or object thought to bring luck or anything used to represent a group witth a common public identity, in this case, a sports team.

Say what you will about the costume - Zombie morale has never been better.

While this zombie may not seem powerful, he can allow the player to wreak havoc if kept for long enough, and especially if there are many sports zombies. Treat this zombie as Pea Pod, but more expensive and benefits other sports zombies. To get the most out of this zombie, the zombie hero should try and keep him alive for as long as possible. Fortunately, his high health makes it tough for him to get destroyed on turn 3. If his health gets dangerously low, use a stat-boosting trick like Rock Wall or Vitamin Z on him.

Zombie Coach works well with Team Mascot, as Zombie Coach makes him so all sports zombies on the field can't be hurt for one turn, making them able to survive another turn and giving Team Mascot time to boost them.

Rustbolt can use Team Mascot to great advantages. For instance, Pool Shark can easily become a big threat if not treated with when Team Mascot is on the field, as he will become less fragile and gain more strength. Brain Vendor can also be used on the same turn to get some more damage out and can also be boosted by Team Mascot. Team Mascot works best with All-Star Zombie, Defensive End, and Rodeo Gargantuar, as they are the strongest sports zombies.

Neptuna can use Team Mascot in her Imp decks where he has synergy with Toxic Waste Imp and Imp Commander, allowing him to destroy any plants in front of him if he has enough strength, and draw cards if he hits the plant hero respectively.

This zombie may not seem like a threat when first played, but after a few turns, this can turn extremely dangerous, especially if there are two or more on the field at the same time. Instant-kill cards like Squash should be used to destroy him, while Freezing cards like Big Chill can be used to prevent him from attacking when he gets out of hand. If all else fails, try Bouncing Team Mascot to prevent any further boosts to sports zombies, plus his stats will be reset.

Whatever you do, however, do not let him get too strong. If the zombie hero plays many sports zombies, or even worse, something like a Zombie Coach, it is a highly dangerous situation. In this case, the best option would be to use Doom-Shroom, as it can take out multiple zombies at once. However, make sure the risk of some powerful plants being destroyed in the process is worth taking. It is best to focus on taking him out before such a thing is even possible, which may be hard early in the game. On the turn he is played, tricks like Berry Blast and Meteor Strike can lower his health, but requires additional damage to finish him off. Another easy way to destroy this zombie is playing Whack-a-Zombie or Chomper. The best counters, however, are Zapricot, Health-Nut, and Repeater as they can be played on the same turn as Team Mascot and have enough strength to destroy him before he can boost himself.

Retrieved from "https://plantsvszombies.fandom.com/wiki/Team_Mascot?oldid=2164609"
Community content is available under CC-BY-SA unless otherwise noted.