Health Hothead that says "Team-Up. When destroyed: Do 6 damage to a Zombie here."
Spudow is one tranquil tuber. Still, sometimes he loses his head.
Tater Toss is Spudow's premium legendary plant signature superpower trick card in Plants vs. Zombies Heroes and a member of the

to play, and its ability makes a Hothead on a selected lane. Its closest zombie counterparts are Witch's Familiar and  Octo-Pult.

Spudow is one tranquil tuber. Still, sometimes he loses his head.

Since a Hothead is just a stronger version of Potato Mine, it is better for the player to save this superpower for bigger opponents, and use a regular Potato Mine on zombies that have 2 health or less.

Hothead can be used to block and heavily damage powerful zombies during the late-game, like Trickster and Shieldcrusher Viking, or even in the early-game, such as an Evolved Jurassic Fossilhead on turn 2. Combining this with Potato Mine is also a good idea.

If Spudow uses this, play a weak zombie in its lane so one of your important zombies doesn't take damage or get destroyed. However, this will likely not be the case, as this is typically used to take out a strong zombie after it was played.

Most likely, the only options to counter this is to boost the zombie's health, play a moving trick like Smoke Bomb or Terrify, move Hothead out of the way with Sumo Wrestler or Rodeo Gargantuar, or protect the zombie with Escape through Time.

Single player AIs will play this almost immediately, which can help you waste the ability if you place a weak zombie. 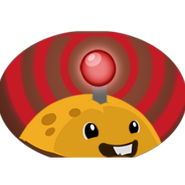 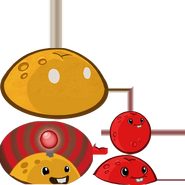 Tater Toss being played, note how it costs 3 sun due to Defensive End's ability