Dino-Roar: Do 2 damage to a random Plant or Plant Hero.
When not exploring Hollow Earth's jungles, they like to go clubbing.
Tankylosaurus is a colossal legendary zombie card in Plants vs. Zombies Heroes and a member of the

. It does not have any traits, and its Dino-Roar ability does 2 damage to either a random plant or the plant hero.

It is based on an Ankylosaurus, a genus of armored dinosaur, specifically the one in Plants vs. Zombies 2.

Its name is a portmanteau of "tank" and "Ankylosaurus," the real-life dinosaur it is based on.

When not exploring Hollow Earth's jungles, they like to go clubbing.

This zombie has poor strength but good health for its cost. Its Dino-Roar ability also allows you to quickly damage a target. However, it is randomized, though you can help it be more likely to hit a certain target using field-clearing cards like Gizzard Lizard and The Chickening.

Since it has low base strength, it works well with Disco-Naut, as any damage it does to your opponent will be unblockable. Binary Stars help too, as they can make Tankylosaurus do 4 damage every time you draw a card without ruining Disco-Naut's ability. Combining all three of these cards can prove to be very deadly.

Each hero can use this in their own ways:

Statwise, this zombie won't do a lot of damage by itself. However, if your opponent puts emphasis on card draw or gives this zombie

Deadly, it can wreck your defenses easily.

Thankfully, there are a few solutions to this card. Its low base strength means that Chomper, Toadstool, and Whack-a-Zombie can destroy it if it is unboosted. Having a field full of flowers with Briar Rose can destroy it immediately if it or its ability damages a flower.

Using Peel Shield can almost negate its ability. Having several nut plants coupled with a Mirror-Nut on the field can make your opponent think twice before activating its ability since they cannot control who the ability targets. 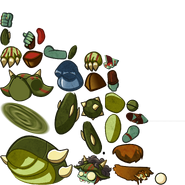 Tankylosaurus activating its ability on Spudow, Water Chestnut, and Guacodile at once due to Unexpected Gifts being played beforehand

Tankylosaurus with a star icon on its strength 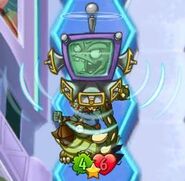 Maniacal Laugh being played on Tankylosaurus