Super Rare
The Tank Commander is a distant cousin of the Soldier Zombie. He lost his tank but still has a HUGE cannon!

The Tank Commander is a distant cousin of the Soldier Zombie. He lost his tank but still has a HUGE cannon!

The primary weapon of Tank Commander is the Mega Cannon. The facts below apply to a fully upgraded weapon.

A large metal thing that enhances the reload speed of the reloader. It must reload faster!

Think of this zombie as a mobile artillery piece. The Tank Commander can work as a long range artillery gunner that attacks the garden (and any plants around it) for far away using either its primary weapon or the ZPG (or its alternative, the Multi-Rocket). A useful strategy is to Rocket Jump up to a rooftop that is at a safe distance from the garden while still providing a good view over the surrounding area, then fire the Mega Cannon at any defending plants. When on the offensive, the Mega Cannon rewards accuracy since direct hits deal enough damage to vanquish a Chomper in three hits (unless it is an Armor Chomper) and any other plant in two direct hits. The slow rate of fire can however be troublesome.

The Tank Commander is also good at destroying potted plants since two direct hits from the Mega Cannon should take down most potted plants (or if not, leave them severely damaged), alternatively, it can be used to vanquish Peashooters and Sunflowers using their Pea Gatling and Sunbeam abilities (though the ZPG is better for this task). The Mega Cannon is also good for clearing out Tallnut Battlements and Iron Maidens because of its immense damage.

Clearing Potato Mines with the Mega Cannon is slow but effective since a single hit is often enough to destroy several of them (even from a distance) due to the splash damage.

Note: Serving as a long-range artillery gunner by firing at plants from afar is more likely to yield assists rather than actual vanquishes, due to the Mega Cannon only firing one shot before needing to reload. If vanquishes are the main target, more offensive gameplay is recommended, preferably as another class. ZPG can help with vanquishes when using this class.

When playing along with a Tank Commander, you may have an advantage (if he is cooperative) since he is capable of providing long-range support by attacking plants from afar, allowing you to finish them off more easily. In addition, the Mega Cannon's splash radius allows the two of you to deal damage to two separate targets while having one of them receive damage from both of you, this is because if both plants are close enough, when one is hit by the Mega Cannon, the other plant will receive the Tank Commander's splash damage in addition to your damage.

Try to avoid getting hit by his weapon because if you do, it will cause 75 damage (or sometimes even 90 damage) if it hits you directly, the Peashooter's Hyper can be useful for dodging most of the damage. If you are hit from long range, however, the damage dealt will not be as much of a threat. However, be careful of also ignoring ZPGs, as the Mega Cannon shots and the ZPG look similar in a way. You would know if it was Multi-Rocket though, because multiple rockets don't usually come from a group of Tank Commanders. 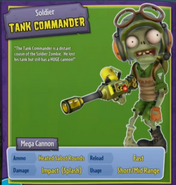 A Tank Commander (left) with a Camo Ranger (right) - Note: Camo Ranger's hat is black rather than dark-green

Tank Commander in-game
Add a photo to this gallery

Retrieved from "https://plantsvszombies.fandom.com/wiki/Tank_Commander?oldid=2358120"
Community content is available under CC-BY-SA unless otherwise noted.