For their appearance in Plants vs. Zombies 2, see Tangle Kelp (PvZ2).

Tangle Kelp are aquatic plants that pull the first zombie that nears them underwater.

After beating Level 3-3
Must be planted in water
"I'm totally invisible," Tangle Kelp thinks to himself. "I'll hide here just below the surface and nobody will see me." His friends tell him they can see him perfectly well, but he'll never change.

Tangle Kelp is a single-use aquatic plant appearing in Plants vs. Zombies. He drags the first zombie that makes contact with it underwater, killing the zombie and vanishing after.

He is based on kelp, large brown algae seaweeds that make up the order Laminariales with long, stringy leaves that have been known to tangle small fish. Due to being covered in thorns, he may also be based on the prickly seaweed (Acanthophora spicifera), a species of marine red algae covered with many distinctive small spine-like branches in the family Rhodomelaceae.

The fact that he tangles zombies is a reference to how real-life kelp tangles small fish. The tangle in his name refers to how he tangles up zombies and drowns them underwater, defeating them.

Tangle Kelp is unlocked by completing Level 3-3. He can only be planted in water, but will instantly kill any zombie that he abducts, regardless of health.

Tangle Kelp's main advantage in comparison to other ground-based instant plants is the plant's relatively low cost, combined with fast recharge rate and independence from Lily Pad. Because of this, Tangle Kelp can be used as a specialized plant for guarding water lanes early on, acting like an economical, single-target sea mine that buys the player time to set up. Unfortunately, Tangle Kelp's limited effect plus his inability to be planted on land mean that he quickly loses his potential in the mid- to late-level. This means that when considering Tangle Kelp, the player will have to decide between early-game and late-game utility - a Lily Pad plus a Squash or Chomper will prove to be more flexible in most cases.

Tangle Kelp are decently useful against Snorkel Zombies and Dolphin Rider Zombies, as he cannot be dodged by them under any circumstances. In the Fog levels, Tangle Kelp faces competition from Sea-shroom for the role of early pool defense, as the latter is a permanent standing plant and requires no sun to be planted. However, when the Sun production is up, Tangle Kelp can be used as a good instant kill because sun is no longer a problem. He is also effective against the Tall-Nut zombie when it appears on water, as he can instantly defeat that zombie while other plants that can also defeat it instantly on water costs anywhere from 5-6 times higher. 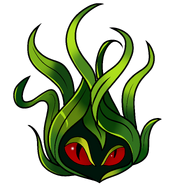 Online Almanac entry (note it is on land)

Tangle Kelp seed packet in the iOS and Android versions

The player got the Tangle Kelp 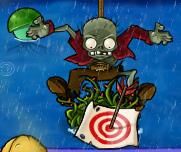 Tangle Kelp in the DS version

HD Tangle Kelp
Add a photo to this gallery

Retrieved from "https://plantsvszombies.fandom.com/wiki/Tangle_Kelp?oldid=2355539"
Community content is available under CC-BY-SA unless otherwise noted.