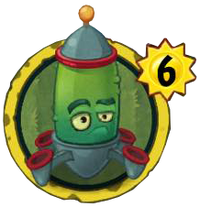 For the item of a similar name that appears exclusively in the Chinese version of Plants vs. Zombies 2, see Cuke.

For the version in Plants vs. Zombies: Garden Warfare, see Tactical Cuke.

Destroy all Plants and Zombies on the Ground.
He comes from a long line of very precise cucumbers.
Tactical Cuke is a galactic super-rare plant trick card in Plants vs. Zombies Heroes and a member of the

to play, and his ability instantly destroys all plants and zombies on ground lanes.

He comes from a long line of very precise cucumbers.

Tactical Cuke works similar to Doom-Shroom except for costing 1 more sun and his ability being more extreme in a way. While Doom-Shroom only destroys stronger plants and zombies, Tactical Cuke is a complete reset of the ground lanes' fighters.

If your opponent spends many brains playing zombies of great power, Tactical Cuke is a great way to erase their play. With enough spare sun, this can be followed up by a powerful offensive plant like Magnifying Grass. You can also place the Solar Winds environment on every ground lane and then play Tactical Cuke in the next few turns. That way, you can wipe out all your plant space as well as the zombies, which can help obtain more sun in the next turn.

This can also purely be played as a last ditch emergency card, wiping out powerful zombies on ground lanes so you can live to the next turn, avoiding certain defeat. This is especially helpful against zombie heroes that rely on environment decks, where you can destroy powerful zombies that are in powerful environments. Or, you can purposefully destroy your own plants with "When destroyed" abilities to finish off your opponent or certain zombies before your opponent gets to play tricks that can turn the tables; Solar Flare can destroy Grapes of Wrath or Punish-Shroom along with many other mushrooms to defeat her opponent, and Wall-Knight can destroy Potato Mine, Primal Potato Mine, or Hot Date to snipe

But if you need to avoid destroying your own plants but need to destroy a zombie on the ground lane, then Lawnmower is a better option. Wall-Knight and Rose have an extra lane to work with due to them having access to Amphibious cards. Also, try to avoid playing this trick when there are zombies with "When destroyed" abilities on the ground lanes such as Gas Giant and Imposter, as they will activate their abilities when this trick is played.

This trick can defeat you easily when he is played, and unlike Doom-Shroom, you can't depend on low-strength zombies to avoid him like you can with Doom-Shroom. This can turn out worse if you are using an environment deck as all your zombies in your environments will be destroyed. The best way to counter this trick would be to try and discourage your opponent from playing the trick in the first place. Gravestone zombies are highly effective, as zombies are immune to him while in their gravestones. Graveyard is the best counter as your opponent cannot use Tactical Cuke with it, but beware of Wall-Knight who can use Grave Buster.

If your deck lacks Gravestone zombies, playing Teleport or Teleportation Zombie is another way of dealing with your opponent even after the ground has been wiped out.