3 min.
TV Head is a Spawnable zombie in Plants vs. Zombies: Battle for Neighborville. He is the ranged counterpart to the Browncoat Zombie, preferring to attack at a distance rather then up close, dealing damage to plants by firing projectiles at them.

TV Heads can be found in the overworld or spawned by players. TV Heads appear to be normal Browncoat Zombies with a CRT television on their heads. They also carry a weapon resembling a VHS player which act as ranged weapons which can be used to fire green VHS tape projectiles at plants.

TV Heads are the plant equivalent of the Wildflower, it deals ranged damage to plants and can throw an explosive microwave dinner. Once one is spawned, it then has to cool down for 3 minutes.

As confirmed by the TV Head class, spawnable TV Heads' primary weapon is the Unkind Rewind, it deals moderate damage at a fair distance and can only fire in bursts of three at a time. TV Heads will prefer using their primary, backing up when their opponent gets close.

TV Heads running away from a Snapdragon 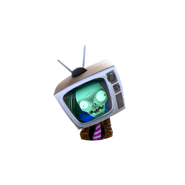