Receive armor from each nearby ally TV Head, bot, or minion.

Grouping up for more durability

Use TV Heads in a group to overpower your plant opponents. Just try not to get struck by his Rapid Fire Tape Ejector.
TV Head is a playable zombie class in Plants vs. Zombies: Battle for Neighborville. He is a Swarm class who specializes in grouping up with AI zombies to gain armor and trick enemies into thinking that he is one of them, as well as sending out minions to attack the enemy.

TV Head is purchasable from Rux for 500,000 coins. His plant counterpart is the Wildflower.

TV Heads may be unassuming when they are on their own, but as a group they become overwhelmingly powerful. When they are near ally TV Heads, bots, or minions they receive armor.

TV Head's melee attack is the Snack Attack, it deals 50 damage to all plants in a very short range in front of the TV Head. After attacking, TV Head will be left vulnerable for 3 seconds, being unable to attack. If you a hit is landed with Snack Attack, a message saying "Smack!" will appear and the TV Head will earn 10-30 XP.

Unlike most other weapons, the Snack Attack is activated by pressing the right stick on consoles and the scroll wheel on PC.

TV Head is decent on his own, but is much better in groups or with AI. Stay next to AI to get armor buffs, and group up with AI and player TV Heads to trick enemies into thinking you are AI, get armor, and launch devastating attacks in a group.

Unlike Wildflower's Bloom Boom, If TV Head's Overheated Dinner will stay on the ground for a little bit before exploding if it doesn't hit an enemy. You can use this to your advantage by throwing an Overheated Dinner at the ground while someone is chasing you, let them get hit by the explosion and attack them by surprise.

TV Head's Big Bite upgrade for Snack Attack (TV Head's melee attack) is a good way to ambush your enemy and essentially 'combo' them if you move around enough. Don't expect this to work all the time, however, since the stun time is very short. 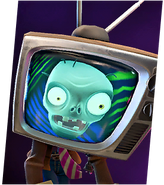 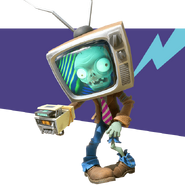 PvZ Battle for Neighborville First Look at TV Head In-Game!
By The One and Only NM