5 min.
More health than your average TV.
TV Buckethead is a spawnable zombie in Plants vs Zombies: Battle for Neighborville. He resembles a TV Head zombie with a bucket on his head. He is the zombie counterpart of the Terracotta Wildflower. He deals ranged damage to plant enemies.

More health than your average TV.

As confirmed by the TV Head class, TV Bucketheads' primary weapon is the Unkind Rewind, it deals moderate damage at a fair distance and can only fire in bursts of three at a time. TV Bucketheads will prefer using their primary, backing up when their opponent gets close. 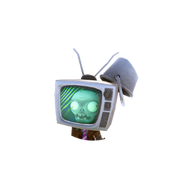