When played: This Zombie copies the

of another Zombie.
It takes a lot of practice for two Zombies' heads to fall off at the exact same time.
Synchronized Swimmer is an event zombie card in Plants vs. Zombies Heroes and a member of the

. She has the Amphibious trait, and her ability copies the stats of another selected zombie on the field when she is played.

She was added in update 1.16.10 for the Summer Nights Weekly Event, along with Corn Dog, Clique Peas, Sap-Fling, King of the Grill, Trapper Zombie, and the Galactic Gardens set.

Her ability references a meaning of the word "synchronize," meaning to "cause to occur or operate at the same time or rate," and her description references what she is based on.

It takes a lot of practice for two Zombies' heads to fall off at the exact same time.

Synchronized Swimmer has mediocre stats for a zombie that costs 2

, but what makes her really great is her ability to copy the strength and health of any other zombie in play, allowing you to essentially "clone" a zombie for only 2 brains. She also has the Amphibious trait, so you can play her on the aquatic lane, where defenses are typically weak. As a result, Synchronized Swimmer should be played a bit later in the game, where you can easily have a very strong zombie on the field. However, she does not copy traits, so you will have to compensate that somehow.

Since she is part of the Beastly class, every Beastly hero can use her to their advantage. She is especially powerful in pet, ramp, and Gargantuar decks, where zombies can easily accumulate stats; even though some decks will lack health-boosting options, Synchronized Swimmer's Amphibious trait can patch that weakness a bit. On top of that, there are stat-boosting cards like Vitamin Z, Loudmouth, and Secret Agent to make Synchronized Swimmer stronger; just remember to play them on the zombie whose stats you want to copy and not on Synchronized Swimmer.

Electric Boogaloo can make use of her dancing tribe to his advantage. Her Amphibious trait allows him to fill the aquatic lane with a dancing zombie, after which he can play Flamenco Zombie to do more damage to his opponent, or evolve Headhunter on her to result in a very dangerous zombie on the aquatic lane. She also synergizes with Aerobics Instructor, who will continuously boost her strength at the start of each turn.

Speaking of Electric Boogaloo, you can also benefit this zombie with Valkyrie as you can play swarms of cheap, weak zombies and once they are destroyed, Valkyrie will be boosted greatly, and once you play Valkyrie, you can have a Synchronized Swimmer with a ton of strength and decent health as Valkyrie herself.

At the same time, since Synchronized Swimmer is also a sports zombie, The Smash can use her in his sports synergy decks. Team Mascot and Zombie Coach can apply pressure by boosting Synchronized Swimmer's stats and shielding her respectively, potentially turning her into an absolute nuisance to the opposition.

Immorticia can use Teleport or Teleportation Zombie to play her during the Zombie Tricks phase and surprise her opponent. However, this is a bit risky, as your opponent may have cards to remove any powerful zombies on the field before the Zombie Tricks phase. She can also Evolve Zom-Blob and then play Synchronized Swimmer to copy its stats, bringing more threats to her opponent

This zombie can be potentially dangerous. Remember that her stats will not change once her ability activates, so simply Bouncing her is not good enough, as she can be played again in the next turn. Eliminating any strong zombies is also vital, as your opponent will not play her when there are only weak zombies on the field.

If need be, use instant-kills such as Squash and Doom-Shroom to destroy her and/or the strong zombies. The most economic way to deal with her assuming she's not on the water line, as a Solar hero, no matter her Strength or Health, is through the use of Eyespore. Guardian Heroes can also play Doom-Shroom to remove her as well as other strong zombies. 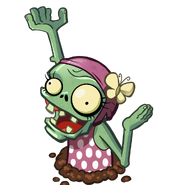 Synchronized Swimmer right after she pops out of the water 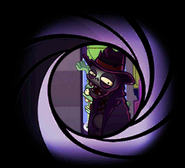 Synchronized Swimmer being the featured card in the menu for the June 13th, 2017 Daily Challenge

Synchronized Swimmer being the featured card in the menu for the June 17th, 2017 Daily Challenge

Synchronized Swimmer being the featured card in the menu for the June 29th, 2017 Daily Challenge

Synchronized Swimmer being the featured card in the menu for the July 3rd, 2017 Daily Challenge